PRICING NOTE: Pricing on these has been all over the place since their launch. They dropped to $329 during the Rediscover America sale, but that sale is one of their biggest promos of the year. 2nds quality go for around $300 before additional sales and promos. Fingers crossed for a Black Friday deal of some sort? Maybe?

Let’s get right to it…it’s boot season. Full-on. And while some of us (myself included) have no fear or shame in our battle cry of “IT’S ALWAYS BOOT SEASON” everyone else can join us once again. Cool mornings, sweaty afternoons, punctuated by wind whipping up leaves into a frenzy just ahead of a 37-degree rain shower and you don’t have your umbrella…ah, fall.

What’s even better is that there’s no shortage of great-looking, comfortable boots at every price point this year. Many of them have been covered on this site at length, and today we add a new offering from Allen Edmonds to the archive: their new Weatherproof Dalton wingtip dress boot. I’ll be honest, when talking about AE these days one has to acknowledge the elephant in the room: when the company was sold to Caleres a while back, many enthusiasts (myself included) were extremely nervous about the future of one of the two remaining U.S.-made dress shoe companies. We had good reason–Caleres’ track record wasn’t exactly one of preservation of heritage. I couldn’t be happier to have been so wrong. Yes, there were hiccups and growing pains at first, but I personally believe they have done a great job of listening to their customer base. What we have here is an example of that…the new weatherproof/waterproof line.

These Daltons are part of the former, WEATHERPROOF line, so it’s important to note the distinction. If you’re caught up in the rain or a snowstorm develops, you’ll be fine on your walk to your car, uber, house, church potluck, what-have-you. More fine than if you were wearing a regular pair that hasn’t been engineered for the elements. That said, if you need to go wading through an ankle-deep creek, these boots aren’t for you. Upon opening the newly-renovated dark blue AE box, we find the boots nicely packaged and secure. No shoe trees are included (but I do recommend using cedar trees as I do with all my nicer footwear), and for some reason the previous practice of a pair of nice felt bags has been replaced with one single giant bag. Still nice for a storage solution to be included, but I (and others) have been left a bit puzzled by the change to a single bag. This is all fairly small potatoes though, and while it may be a deal-breaker for some, it isn’t for me.

Removing the shoes from the box provided a tactile experience I’ve not had with an AE shoe since handling the higher quality, Independence line in-store a few months back. The leather on these weatherproof boots is extremely soft. Far softer than the calf on my personal bourbon pair, and any other calf Dalton I’ve handled in the past. AE is pretty tight-lipped about the leather used; they only reveal that it’s full-grain calfskin (and it certainly feels thick like full-grain) but obviously it’s been tanned or treated in some way to earn the weatherproof nomenclature, which also leaves the leather unbelievably supple…and you can get it in any color you want (as long as it’s brown). Dainite sole and sealed construction. Looks like the welt on this one has drifted into the studs?

The Goodyear welt also appears to be treated, possibly heavily waxed from the feel, to improve weatherproofing–but again AE only says “sealed construction”. My sales team at the DC City Center store, with whom I’ve been nothing but completely impressed every time we interact, simply aren’t aware of the details and I didn’t press them too hard.

Attached to that welt is a Dainite studded rubber sole, which is considered one of the best options for making dress shoes and boots easier to live with in moist climates. On a personal level, while the Dainite has worked well for me on wet pavement, wet grass can present its own inherent dangers…and don’t get me started on wearing a wet Dainite sole on a marble or other hard floor. For truly poor weather I’m a Vibram or Commando sole guy all the way. But again, if you’re out and about and the weather could get soupy, Dainite is several notches above plain leather. Also notable is that on the pair I received for review, the sole was attached with less-than-exact attention to detail. While that’s not really a huge issue for me or many people, I’m willing to acknowledge that at the MSRP being asked, one would expect a bit more care to be taken in construction. An extra few moments when placing the sole is all it would really take. Leather lined with a weatherproof membrane.

But, that’s just me being nitpicky, if I’m honest. At the rate that AE does sales, and the fact there’s several pairs in various sizes on the Shoebank factory-seconds website right now at a much-discounted price (though that comes with its own potential pitfalls to include a $25/pair restocking fee if you return them) they become much more attractive. (And it’s important to state that the misalignment doesn’t appear to affect build quality at all; it is strictly aesthetic–and who looks at the bottoms of other people’s shoes besides me and Joe?)

While I didn’t get a chance to wear these out in a torrential downpour to see how they really stack up against a “regular” Dalton boot, I did get a chance to try them on. Fit was identical to my usual 10B fit in both Bourbon Calf and Burgundy Shell Cordovan with enough room for a thicker dress sock if desired; however, that gloriously soft leather leads me to believe that there would be little to no break-in necessary for these boots. Much like the AExMD (Formerly Massdrop, now DROP) Chukkas frequently offered, these fit like an absolute glove and are CRAZY comfy right out of the box. The only other pair of boots other than my MD Chukkas that did that are in Kudu leather from another company, and had a price tag well north of what these can be regularly had from AE. 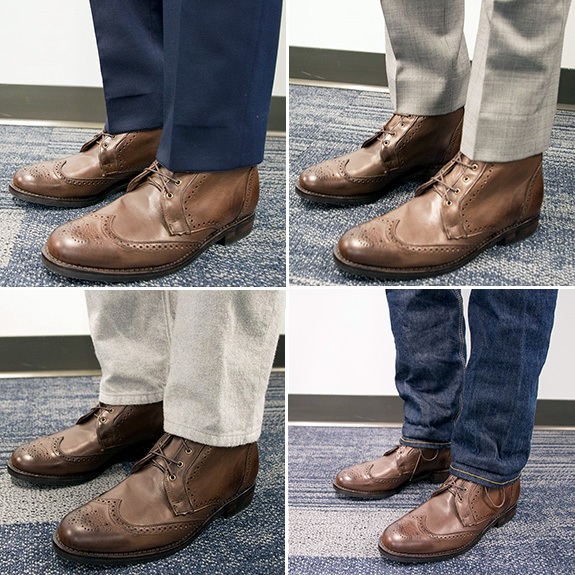 Versatile and then some. Looks great with wool trousers, flannels, jeans, etc.

My only other gripe, if it can be considered one, is that the dye doesn’t seem consistent across the upper. There are several different reasons this could have happened, and while I’m not one to speculate, this could include the tanning/treatment process being incompatible with dye absorption, attempted burnishing which didn’t take very well, or a hide that just wasn’t as evenly porous as others. One has to remember we’re still talking about natural products (to an extent, obviously, given the treatments applied to get it to this stage) and natural products always have flaws. I would say my strongest recommendation for this model would be to go get a hands-on, and feet in, feel for them at your local AE brick and mortar shop. Odds are there will be variations across the range as with any full-grain leather product.

About the Author: Mark G. has been a member of the US Air Force for the past 17 years, serving 11 years on Active Duty and now a full-time member of the Reserves. Currently in Maryland, he enjoys a variety of hobbies, to include mediocre woodworking (he’s just skilled enough with his power tools to—at press time—retain all fingers and toes), hunting, as much travel as possible, and even occasionally badly impersonating a horse. A relative newcomer to the world of men’s style, he’s found a niche and rocks it whenever he can, from dressing for brunch in NYC to an Embassy black-tie party in DC.