First… there’s nothing wrong with a hoodie. And despite what the above image may indicate, no one is making the case for guys everywhere to trash their collection of hoodies. That said, if you’re the type that’s open to elevating your look, even just a little bit, when dressed down? Then these alternatives to the ubiquitous hooded sweatshirt are worth exploring.

All of the below hoodie-substitutes offer many of the same advantages of a hooded sweatshirt (i.e. easy to layer, casual, comfortable) yet will look a bit more aesthetically appealing to most. Think more purposeful, and less just rolled-outta-bed. Again, these are just suggestions for alternatives. So if you’re on team hooded-sweatshirt, don’t get your strings in a twist. As close to a hoodie as it’ll get, yet you ditch the extra bulk of a hood, and replace it with a more streamlined, yet still neck protecting shawl collar. Besides, 99% of the time the wearer of a hoodie isn’t actually wearing the hood on his/her head. So is it really that much of a feature you need? These cardigans are often made from wool, but cheaper cotton versions work too. The cardigan style almost always swaps out the zipper of a hoodie for buttons, which classes it up a little. Something you’ll want to have for around the house/apartment. 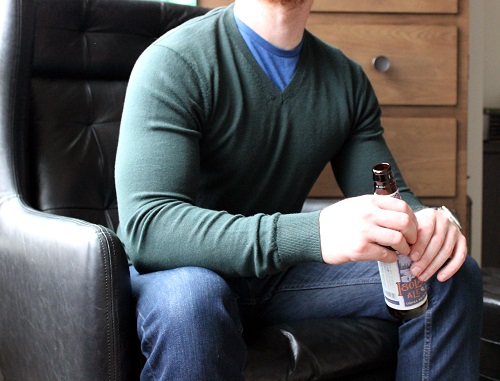 This combination gets a bad rap for really no good reason. Sure, self-proclaimed style aficionados abhor a visible white undershirt under a sweater or button up (yet even then, when it’s a decent looking white tee at the base, it can be done)… but this isn’t that. And remember, you’re not going to address the United Nations in this getup. We’re looking for hooded sweatshirt alternatives. It’s casual, but still a little more put together. Use your favorite slim-fit, plain (no graphics), complimentary color tee, and layer it under a well fitting, merino or lambswool V-neck sweater. Wear with jeans or chinos.

#3. A Crewneck Sweater with a little character Think bold stripes. Or maybe it’s made in a knit or a texture you wouldn’t normally reach for. Or color blocking. You get the drift. There’s nothing wrong with a plain crew of course, but often those extra details dress down the sweater. And if you’re replacing a hoodie, that means you’re already pretty dressed down. Made from cotton or wool, chore jackets are the kind of thing “sporting” men used to wear when working on their property (land, farm, estate, whatever). Now some of us just wear one out to a casual kill-the-hangover (or watch other people kill-their-hangovers) brunch. And maybe some leaf raking will happen in one later on. They’re hugely convenient. An easy on/off layer, not too heavy, and does all the things right that their cousins the shirt-jackets sometimes don’t. Not everyone’s style, but a long sleeve polo (or heck, even a rugby ) is plenty casual, and still loses the bulk of that hood hanging off the back of your neck. Plus it looks great under sportcoats and even less structured suit jackets. A note about the Banana Republic option shown above. That’s a size medium on 5’10” / 195 and while the fabric is great, it felt a little short in the tail/torso length on my frame? But I have a longer torso (stumpy legs here checking in). So just be aware of that.

These made-for-the-sea style sweaters almost always have something a bit different about them. Crewneck sweaters with buttons on the shoulder were originally worn by French onion & garlic merchants crossing the channel to sell their produce in England. Why buttons? Because they used to have extremely tight mock-necks that you couldn’t just stick your whole head through. They were knit this way to keep the cold spray of the ocean out, and the warmth of the person wearing it in. Since your head is bigger than your neck (no, really… I swear), the wearer would put it on unbuttoned, then button up the shoulder so the neck would then be encased in sheepswool. Now it’s just a design detail, but unbuttoning the button close to the collar really does seem to help it lay easier over a t-shirt. Other nautical style cues include variations of thicker knits, bold stripes, etc. And they’ve gotta be made out of wool or a mainly wool blend. Why? Wool still keeps you warm when it gets wet. Cotton doesn’t. Cotton will kill you if you get wet and need to stay warm. For those that are looking to replace a zip-front hoodie for that easy on/off layering. Don’t knock the style. Don’t think you can’t pull it off. Don’t go all “but I’ll look like Mr. Rogers.” Just try one. Put it over a t-shirt. Or a polo. They’re game changers. These are not your grand-dad’s yacht club blazers. These are the super comfortable “swazers” that can look good with a t-shirt or henley… as well as an OCBD. Could you wear a hoodie over that henley? Sure. But the sportcoat looks terrific too.

This post originally ran in 2015, but has since been updated with current product suggestions.