When I saw Allen Edmonds had added a new “mahogany” shade of leather to their flagship Strand… I panicked. I thought: Oh no, they’ve taken the glass smooth/plasticky/rubbery leather they used on the younger leaning Bond Street, and they’re now using it on the classics?

Thankfully, those fears were unfounded. This is NOT that mahogany. Variations! Depth! NOT the Bond Street!

After a quick order for an in person look, it’s clear that this new shade feels and seems to act just like their other classic leathers like walnut, black, dark chili, and oxblood. There’s depth to the color, and ever so slight variations to the saturation. It doesn’t look artificial (which the Bond street Mahogany does). It feels and moves like the usual walnut or chili or black. And this leather feels like it should take a polish and shine just fine. 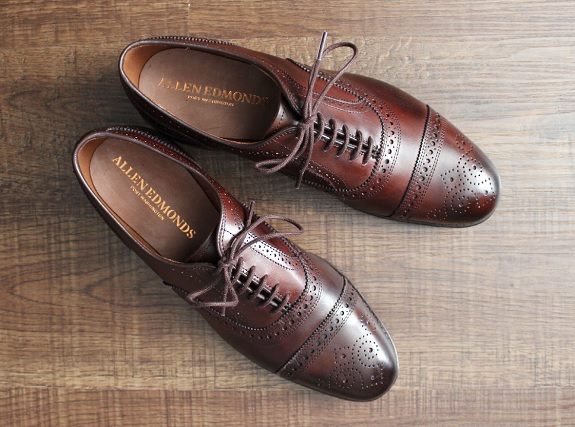 Brown. But with some red for sure.

It’s not as red as chili or oxblood. It leans more brown. And noticeably darker. Is it the old “merlot” color? I don’t… think so? Less red than the old merlot? But yes, it does have a bit of reddish hue to it. In some light it can look almost DEEP cherry-brown, and the subtle variations/depth to the leather really is pretty terrific. Shown here with the out of stock Merino-Cool Shark Socks

There’s been a hole in the Allen Edmonds color palate for a while. They’ve needed something between black and oxblood. They tried to fill it with “coffee”, but that didn’t seem to work. Coffee, while not light like walnut… was still too light. More conservative leaning dressers wanted something darker. While the weatherproof German sourced “brown” leather is flat out excellent… to many, it lacks panache (*makes jazz hands movement to acknowledge how ridiculous this all sounds*). And the “cigar” shade? Cigar is so rarely used that (full disclosure) I forgot about it until after I had written this entire post, and thus, had to go back and mention it. Can look “redder” in some lights. More brown in others.

Mahogany just might be the winner they’ve been looking for. Something to please both sides. Conservative enough to be worn with darker grays… eye catching enough to hold an across-the-room glance when worn with blues.

Thus endeth a strangely voluminous deluge of words about… a new color of dress shoe.

Obligatory mention of the finest cinematic moment for the word “mahogany”