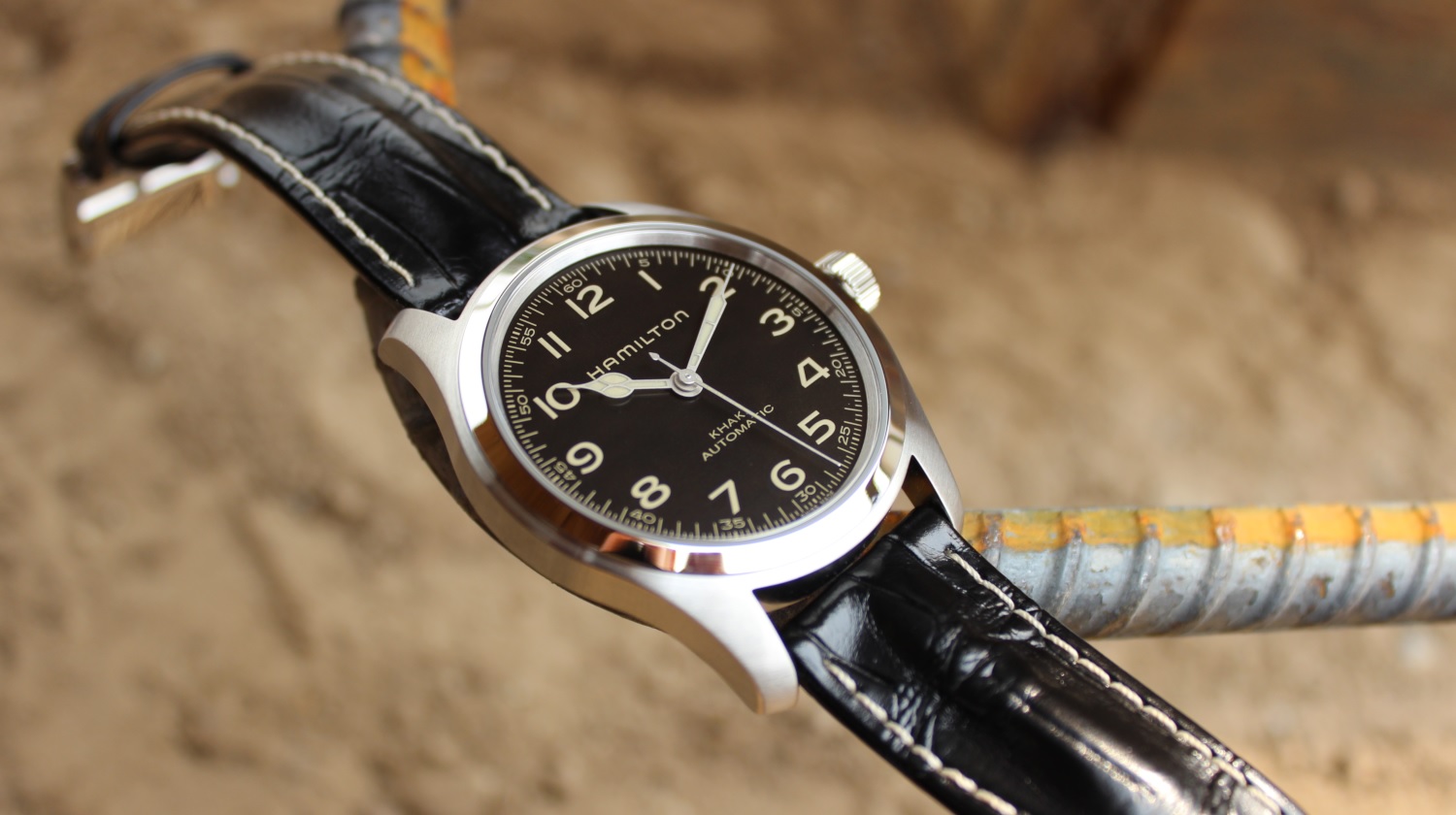 Heads up: Nordstrom has price matched the Hamilton Murph at 25% off. A bunch of other Hamiltons are 25% off too. No idea who dropped their prices on Hammys, but, Nordstrom has price matched them and they’ve gotta be an authorized dealer, so you should get a full factory warranty. Plus? It’ll ship and return for free. No word on when these prices expire. Now on with the review…

Interstellar is a triumph. If the point of art is to evoke emotion, then it delivers. It is awe inspiringly beautiful, and it’ll rip your heart out.

And a wristwatch plays a role in executing that… forced cardiac expulsion.

That’s all that’s gonna be said about that. Spoilers and what not. Even though the movie came out in 2014. But that’s a sign of respect, right? The reluctance to giveaway plot details no matter the age of a piece of fiction? “But does Odysseus ever get home?” You’ll have to find out for yourself. It sure as hell isn’t my place to say.

The Murph watch from Hamilton is a faithful representation of the watch in the movie. It is also surprisingly large in person, could benefit from a sized-down model, yet it has and will continue to find a daily home on the wrists of sci-fi fans, girl-dads, and anyone with an appreciation for the movie, and simple time pieces. 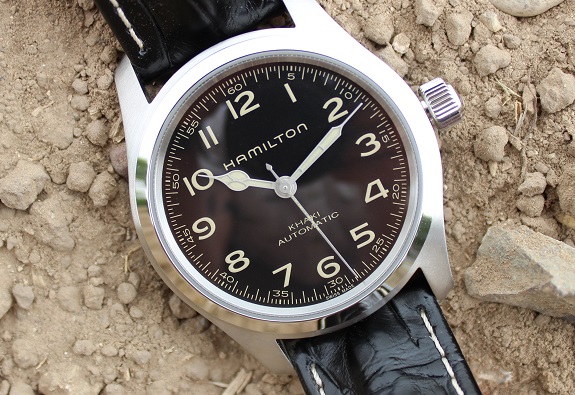 Terrific hands, with EUREKA spelled out in morse code on the seconds hand.

At 42mm, you’d think it’d please plenty, but for some reason it wears a bit larger. Maybe it’s the 22mm lugs, but a 38mm – 40mm addition to the line with a 20mm lug width/strap would be ideal. It’s certainly not obtrusive, but with it’s classical good looks, a slightly smaller size is probably a good idea. 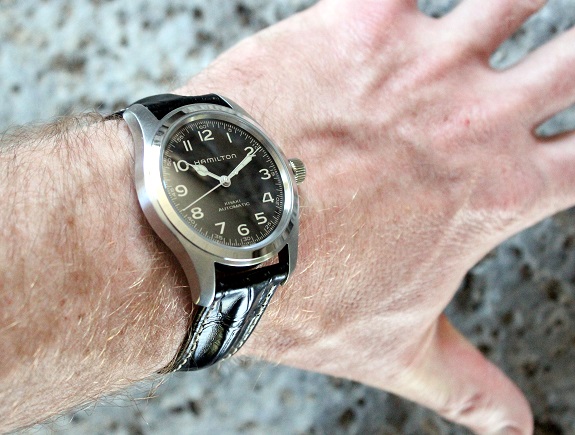 42mm case size and 22mm lugs make it wear bigger than you think.
Will look great on many wrists. Will be too big for some.

The font and hands are a perfect antiqued-lume-look/shade, while the word EUREKA is ticked out in lacquered morse code on the seconds hand. This thing looks like something your Grandpa could have worn (aside from the relatively modern 42mm sizing), every day, no matter his profession. They were shooting for timeless with those design elements, and they got it. 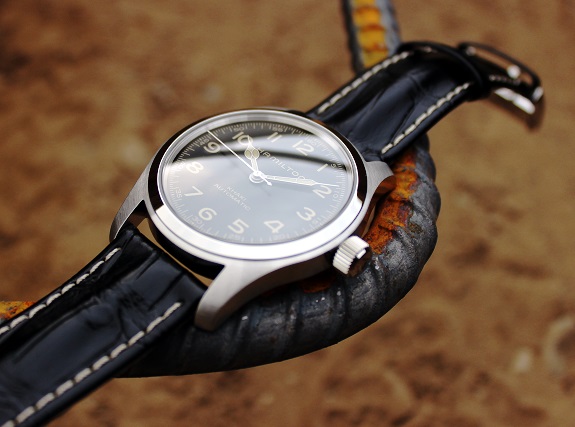 Could use some anti-reflective treatment to the sapphire crystal.

It does have some odd glare. Mainly, the crystal. It’s sapphire, but holy moly could it stand some anti-reflective treatment. Maybe they were trying to stay true to that “this coulda been your Gramps'” watch design there too? Also, the very top ring of metal that surrounds that sapphire glass is polished. Not matte. So between that and the glass there is, sometimes, a bit of a mirror effect. Don’t check the time, unless you wanna see some of your face. Some of us could do without, uh… unexpected face. 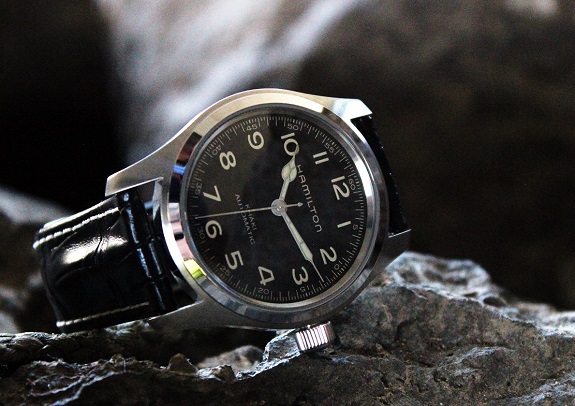 This picture was shot on the moon.*

Movement is a hacking and hand winding 25-jewel Swiss automatic with a, wait for it, 80 hour power reserve. That’s impressive. The crown is flat-out terrific. The winding action has just enough tension, and the movement between secured, and out to “1st position”/change the time mode, is crisp and snappy. Water resistance is a more-than-fine 100m. It’s a field watch after all. Not a diver. Caseback is exhibition, so you can see the movement doing its thing. Price is up there, but it’s a bit of a grail watch for some. And if you keep an eye on Nordstrom, where it comes and goes in terms of stock, you might be able to snag one during a rare price-match situation.

Interstellar is a brilliant movie. This is a mighty handsome watch. But with a few design tweaks, many would find the Hamilton Murph automatic to be even better than it already is. This picture was also shot on the moon**

*No it wasn’t.
**Also untrue. The moon doesn’t have water. It’s made of cheese. And we all know that watery cheese is yogurt. And if the moon was made of yogurt, it’d drip out of the sky and make an unholy mess. Unless it’s fro-yo, which is totally possible, since the moon can get quite cold. So maybe it is yogurt?