The most iconic wristwatch design, ever, just might be… The Rolex Submariner. (Did you think I was gonna say the Monaco?) And there are many, many “homages” to the Sub, scattered across the price spectrum from dirt cheap to outlandishly expensive.

Fans of the Tag Heuer Monaco aren’t so lucky. Maybe it’s because square cases are harder to waterproof (the Monaco was the first to do it), or harder to manufacture, or we’re all just used to circles on top of our wrists instead of squares. But good grief there’s something about the Monaco and its fast, motor sport inspired looks.

The list isn’t long, but if you’re a fan of the Monaco but no fan of the price, here’s one way to scratch that fast itch without shelling out months and months of rent or mortgage money. Are they all super close to the original (or, the updated Calibre 12)? Perhaps not. But these watches are in the ballpark/pit lane of the Monaco, for much much less… 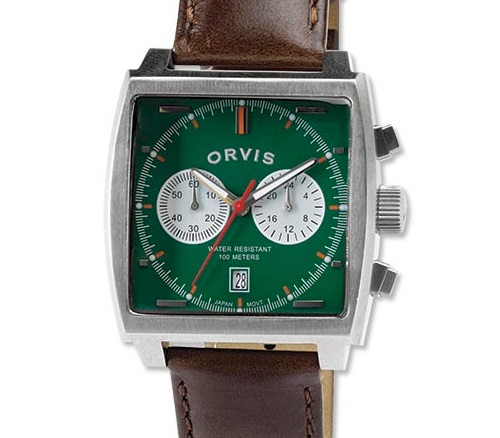 Well that’s just shameless. They even nabbed the horizontal indices from the original Calibre 11 Monaco. Just a green dial available. (Perhaps a blue dial really would have been too much?) Japanese Miyota chronograph movement. Date window at six o’clock just like the Monaco. Orvis logo looks a little wonky with that curve to the text, but, the inspiration overall is undeniable. A round case, but obviously inspired by the Monaco. Powered by a Seiko “Mecha Quartz” movement, which means you get the reliability of a quartz and the feel of a mechanical chronograph at the pushers. See our full review over here. Crazy to think these things were going for $379 at one point. Now down to a much, much more palatable price point for what you get. It’s nice, it’s just not mind-blowing. From the guys who did the Rossling & Co. watch kickstarter all those years back (if memory serves, the Helgray began as a kickstarter as well). Comes with both a stainless steel bracelet and a leather strap, plus a spring bar tool to swap them out. Currently being sold by Massdrop, and thus, they’re final sale. UPDATE: Got an email from a reader who said he had a terrible customer service experience over returning a Helgray. Now, these are final sale, but, that might be indicitive of larger issues. So be careful with this thing. Warranty might be non-existent.

A favorite that has gotten lots of play around these parts. The second design from Armogan, who made serious waves with their aviation inspired “Spirit of St. Louis” chronograph a while back. The Le Mans is a little smaller (42mm vs 44mm for the Spirit) and is a master class in combining retro aesthetics without falling into goofy/costume territory. Full review here. Can go on sale and drop to as low as $155, but, currently sitting at full price.

Another not-square option, but it has the contrast (albeit flipped) and not your average case shape. More of a cushion than a regular ol’ circle. That is one mighty fine looking throwback. 43.5 mm case (and what a nice shape it is), so not some wilting flower, but not overly bulky and feels great on the wrist. Ships and sold by Amazon at post time. 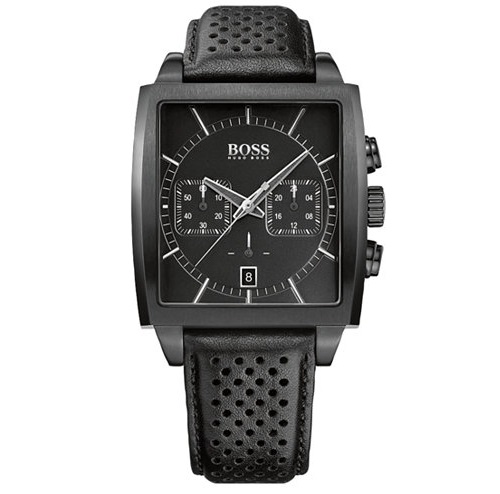 Proof that a higher price doesn’t always correlate to higher quality. This is a “fashion” watch, so, don’t expect the world. But if you’re really out to get a square case chrono, and like the blackout look, here’s a less than outrageously expensive option. Still gonna want to wait for a sale though, and a big sale at that. Beautiful case shape. Knurling on the crowns and pushers is a nice touch. Rally style strap. Ships from the UK, and know that you’re on the hook for returns. Also, shipping to the US is a steep, $35 – $40. But still. 42mm in diameter and powered by a Miyota Quartz chrono. Big thanks to reader LG for the tip on this brand. Note that prices on their site are listed in British Pounds, so, you’ll have to do a conversion. 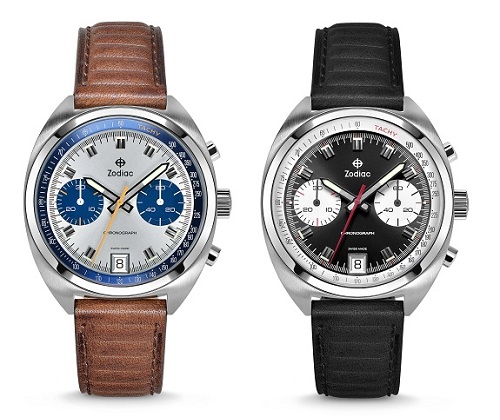 Absolute nails. A quartz of course (it’d have to be since auto/mechanical chronos are REALLY pricey,) but Swiss made and really does that 70s auto-sport look well. 41.5 mm x 48 mm case dimensions. Four different color schemes to pick from. Going with a stainless steel bracelet instead of a leather strap will run you $100 more. Cheap? No. Hardly. Yet it is still much, much less expensive than a Monaco. Super sturdy build feel. 100m in water resistance. And an impressive, 60-hour power reserve when the automatic movement is fully wound. The bezel does rotate, but it takes a bit of torque to turn the thing. 45mm case diameter and an exhibition case back. More than a little tough to find, but it is out there. Full price of $1945 is direct through Hamilton. You can get it for around a grand on the gray market, but just be careful when it comes to choosing a reliable seller. 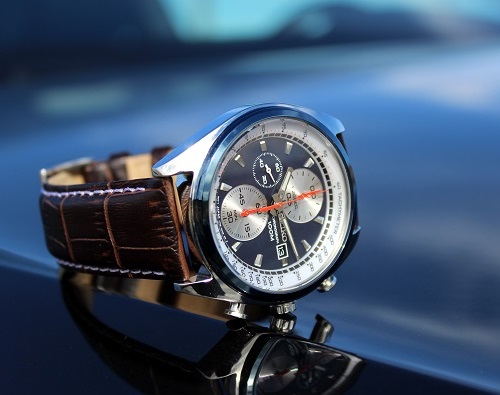 A bonus to the list, but it does sadly appear to be unavailable. A brilliant watch at a fair price that has sadly seemingly gone out of production. Simple fonts, indices, and hands. That Blue/White/Silver/Red color scheme. A chronograph function. Full review over here. Wish it’d come back in stock somewhere.