The Man from U.N.C.L.E. (directed by Guy Ritchie)

Steal the Style is an all too infrequent series on finding affordable alternatives to the styles seen on the big or small screen. If you’ve seen a movie or a TV show that you think is ripe for a Steal the Style attempt, send those suggestions in here.

Set in 1963, The Man from U.N.C.L.E. is a highly stylized, extremely stylish, tongue-in-cheek spy flick that’ll help tide many of us over until the more serious and modern SPECTRE launches in November. It’s the funky & fun aperitif before the martinis start getting stirred (or shaken, whatever, if you want to water it down).

But since it is set in the 60s, the key here is to work a piece or two into your normal wardrobe. Replicate an entire outfit and you’ll look like you’re heading to a costume party. Here are some affordable alternatives to some of the most eye catching pieces from the film. Affordable? Well, it’s tough to find an “affordable” leather or suede jacket since you have to feed, then “terminate” the material before using it. Plus, cheap leather or cheap suede usually isn’t a good idea. This Bomber from Bonobos is a reach, but not totally unattainable, considering it’s a suede jacket. The stand-up collar is a nice modern update compared to Illya’s standard collar in the movie, and since it’s Bonobos, the cut will be trimmer than most standard, boxy bomber jackets. Fingers crossed for a sale? The Cheaper Option: Orvis Suede Bomber in “Peat” – $249 ($325). Just know that Orvis items can run pretty boxy. 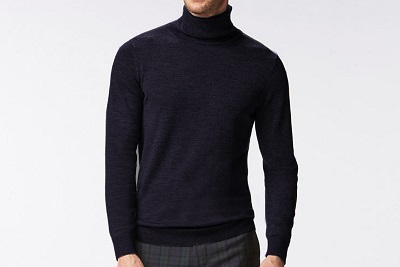 Much easier to source than the suede jacket. And a heck of a lot cheaper too. UNIQLO’s extra-fine merino wool is something else. Some will think it’s too thin, but that makes for easy layering and less over-heating. And that’s perfect for a turtleneck. Want a splurge? Charles Tyrwhitt had a merino turtleneck that’s made in Italy for $79. “You look important… at least your suit does.” Napolean Solo likes his suits three button, three piece, with a ticket pocket, and with arm holes big enough to handle the guns he’s packing. Buttons are also covered in the fabric that the suit’s cut from. Looks good on him in the context of the movie, but going with that high of a button stance and that many buttons… plus a vest… and you quickly drift into Merril Hoge territory (although Solo’s tie knots are much smaller thanks to being paired with a point collar). If you’re as big as Henry Cavill, or, just want all those options, you’re gonna have to go custom. Dude is not fitting into a standard Suitsupply drop, that’s for sure. But strongly consider sticking with a classic 2-button jacket. (Above suits are from Black Lapel and will run around $600.) This was a tough one, because it’s probably some vintage Soviet model. But it appeared to have arabic numberals and seconds sub-dial at 6 o’clock. And the 39mm, Sapphire Crystal, Homage to the NOMOS Tangete from Rodina would certainly fit the bill. Full review here. Meanwhile, if you’re going for the real thing, there are plenty of Soviet Era wristwatches on Ebay for cheap. Many thanks to Andy S. for the tip. The originals will run you close to five hundred bucks, and replicating the look is difficult to impossible, and probably not really suggested either. They’re another item that looks good in context of the movie, but otherwise probably wouldn’t look great on most. The Westbrook (as in Russell) Florida on Jackthreads is heading in that direction, but maybe consider a wayfarer in a grey tortoise? Warby Parker has those for $95, and the lenses are polarized. Pretty darn close to what Illya wears in the film. Harris Tweed and lined in Gore Tex. One of those items that plenty of us wish we could pull off, but might have to wait a few decades to do so successfully. Yet… it looks great on those that can. It really is a classic that doesn’t try too hard, nor does it come up short on the quality for the cash. Got a pair of these for an outdoor wedding 8 years ago when it was threatening to rain. They’re both still going strong, and offer enough protection under the canopy for two people… as long as you’re good with getting close. Napoleon Solo knows a smart Dopp kit design when he sees one. Unlike most other dopp kits, this one zips around and lifts open, so you can easily see and access the contents of the kit. No reaching in and getting bit by the zipper on the way out. Leather. Cheap. In brown or black. Available through Sierra Trading Post. Code expires today, 8/31/13. Played by Hugh Grant, Waverly’s sunglasses (and regular ol’ glasses) seem to be a more streamlined pair of club-masters. So, the Ames from Warby Parker fits the bill. Want something cheaper? Try the Ted Baker “London”, which you can get at Nordstrom Rack for sixty bucks. Look, Jewelry isn’t something most will be shopping for online. But for the sake of this exercise, had to find something. Even though it’s an “Engagement” ring in the movie, it’s really more of a cocktail ring in style. And similar styles can be had for much, much cheaper, if you go the “costume” jewelry route instead of looking for fine jewelry.

Gabby’s Dresses: Something from ModCloth If you’ve got a gal in your life that loves the throw-back look, then point her in the direction of ModCloth. And not all of their dresses look like they were ripped off the costume racks at Mad Men. There are plenty of updated styles that still wink at dress designs from the past. Via Cocktail Kingdom. Pretty retro. If you want the same sort of look but a little less of the 60’s vibe, try the option in silver. Because that’s what they drink. A little herbal on the nose, butter and spice up front with bark and light smoke on the backend. Accessible, but certainly not bottom shelf. (Oof.. bottom shelf Scotch. Barf.) A nice, mid-priced, blended Scotch.

And now, about the movie: It’s fun. Incredibly clever in some parts, a little thin in others. If they make a sequal, although that looks unlikely, I’d go see it for sure. Again, it’s fun.