In Praise of the Slim Sole Dress Chukka

Make no mistake. This isn’t a knock on the traditional, crepe/textured sole desert boot

. Those are a menswear staple that aren’t gonna go anywhere anytime soon, and they’re perfect for casual situations. The difference between a desert boot, and the smooth(er) sole dress Chukka, is not just the bottom of the boot.

Dress Chukkas are often a little sleeker through the body, can be made out of higher quality suede or smooth leather, and also have a bit more structure. There’s no (or at least much less) flopping about when you take your feet out of these boots. And along with their cleaner looking soles, that structure can go a long way in terms of versatility. These types of chukkas can do everything a Chelsea does, but without the elastic goring at the sides. They’ll work with everything from jeans (where some regular dress shoes might clash), to possibly suits (where a desert boot would stick out, badly). Here’s ten pairs of the best in this style, currently available, and with affordability in mind. That shape is perfect. And DSW’s Aston Grey brand is one of the best bang-for-the-buck, and plenty affordable, shoe brands out there. Wish they made these in more than just the one “Cognac” shade, but it’ll still look good with plenty of outfits. Try it with a light grey suit, pale blue shirt, no tie, and gingham pocket square, then wear em’ with jeans once it cools off. Like the Aston Grey option, these deliver on the simplicity factor, and avoids any goofiness that you’ll often see in other shoes in this price range. Available in dependable dark brown and black. Made in regular D widths, as well as EEE. Not the best leather (it’s pretty shined up out of the box… not stiff, but not great either), but with sales & codes they can drop under a hundred bucks. Also shown at the top of the page. And also worth a look, is the new “Castellano” Chukka, which is basically the Jet with a bit of broguing. Currently 10% off w/ NEWFALL15 The Julian is just about sold out in Walnut, but if you’ve got the sha-putz-fa for almost white shoes, there’s plenty left in the “Ecru” shade. And if it’s still toasty enough for a summer suit, then try pairing them with a seersucker or linen number. Meanwhile, the brand new grey or blue suede “Jake” has been carrying the dreaded “BR PICKS” tag as of late, but that doesn’t seem to be the case anymore at post time. So… expect these to drop significantly with codes and sales. Big fan of the grey option. Part of Cole Haan’s higher quality line. Solid construction, and that very subtle bit of broguing/perforations is a nice touch. Available in black, a “copper” suede, and the burgundy-leaning dark brown shown here. One of those boots that makes you wish fall would hurry up and get here. Should go great with all kinds of smart-casual stuff. Made in India. 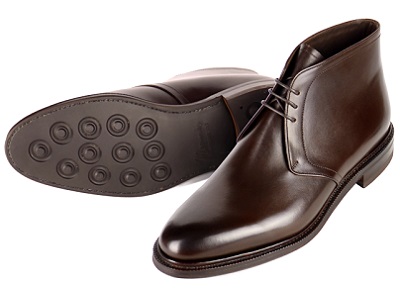 It’s Meermin, so that means there can be complications. They ship from overseas, and it’ll cost $35 to get here. And returns? That’s on you. If you do return something, you’re also out the original $35 shipping fee. But, they are Goodyear welted, quality can be solid (sometimes it’s not so great), and their shapes lean more modern without getting into spear-like territory. Those look… a little odd. But shoes are tough to photograph, so maybe it’s just a bad angle? Can’t tell if it’s got a chisel toe or not. And something funky seems to be going on right before the heel. But, they ship & return for free, and Nordstrom house brand stuff is often really solid quality for the price. Could be a winner, as long as you like the looks of them on arrival. One of their limited-edition styles and almost completely sold out. But Jack Erwin has been known to come out with a few new models every year, and maybe the Henry will get resurrected sometime soon? Or maybe… they’d do a calf-skin version? Blake stitched and made in Spain. Full review can be found here. These are a discontinued style, so you’ll have to head to the Shoebank or eBay to find a pair. And it’s too bad that they’re discontinued, because they’re built on one of AE’s most popular lasts. It’s the same frame that the Strand, Fifth, and Park Ave. is built around. Super comfortable, and the cap toe is just different enough. Plus, they come standard with a slim, v-tread sole that gives you grip in crappy weather. *Note: This price reflects what they’re going for on Shoebank.com. So, 2nds quality, and availability is real scattered, depending on size, width, and shade of leather. Sonja Henie’s Tutu. Those are something else. Yet if you’re hooked on wearing mostly blue, then they might be tough to work in (most prefer at least a little contrast between their shoes and pants). Blake stitched, made in Italy. Ships and returns for free. Would look fantastic up against a brown tweed suit, trousers, etc. Expensive. And might be tougher to dress up than the rest, due to a thicker welt and taller looking toe & vamp. Could do really well with tweed or flannel suits though. Y’know, something with some texture and weight to it. They do come in four different shades of calfskin, including a very autumn-ready brown grain calf (not shown above). Might be one of those styles that ends up in the clearance section or heavily discounted during upcoming sales.

Prefer something you don’t have to tie? Try a pair of Chelseas. Plenty of options can be found here.