Like the other Thompson Suits, prices can fluctuate, greatly, depending on whether or not they’re excluded from sales & promos. Recently, JCF started to slap the “excluded from all promos” label on their suits once again, after allowing codes to be used for the last month or two. Might want to sit tight and wait for these to drop into the $200s.

J. Crew and its little brother J. Crew Factory have a bit of a trickle down strategy going on. Remember the Ludlow “Traveler” Suit (and its ad campaign) that got introduced last year? Right. J. Crew Factory now has their own version, complete with a similar touting of “crease resistant” fabric. The good news is, they didn’t monkey with the rest of what the Thompson already has going for it. Same soft shoulders, slim lapels, lower button stance, and non-functioning buttons at the cuffs. Off the rack fit through the jacket is decent, with some slight contouring. If you’re on the fit to slim side, you’ll probably need the waist to be nipped, and probably the sleeves adjusted, but those are basic adjustments that won’t be much trouble. They’re lined, but it’s in a bit more breathable acetate (instead of a stiff & scratchy poly). And while they’re fused, the jackets move awfully good and don’t feel stiff.

These “Voyager” suits got all that. They’re a regular Thompson, only with a different all-wool fabric that, if memory serves, has a bit of a higher twist to the threads so it’ll resist creasing and wrinkling over time. Out of the box you do notice that the fabric is slightly different than most other suiting material. It looks, at a glance, like any ol’ suit fabric, but there’s a very, very slight texture to it. Nowhere near a burly tweed. Not even close. But it’s not glass smooth either. Some melange fabrics can feel a little like this… say, when cotton & wool are woven together. That’s not the case here since it’s an all wool shell, but there’s definitely something that feels a bit different about the fabric, compared to their worsted wool options. Still lightweight for sure, but seems a tad stronger and maybe a bit more flexible than the J. Crew Factory worsted wool Thompsons. Up close with the fabric. All wool, but has a very light texture to both the look and feel.

You also might notice, out of the box (or, bag as the case may be) that even though it was folded during shipment… it arrives pretty much wrinkle free. At least that was the case with the suit shown in this post. The jacket came in a box. The pants were folded into fourths and shoved into a separate shipping bag. And not much of a wrinkle or crease to speak of.

But that doesn’t seem like much of a test. Hm. If only there was a way to…

THIS REQUIRES… A NAP!

In the spirit of our scientific colleagues such as Galileo, Isaac Newton, and Doctor Emmett Brown, Dappered tasked one brave soul (me) to test the crease resistance of this suit by taking a nap, on the office couch, in the suit, for at least 60 minutes. Behold… the laboratory: 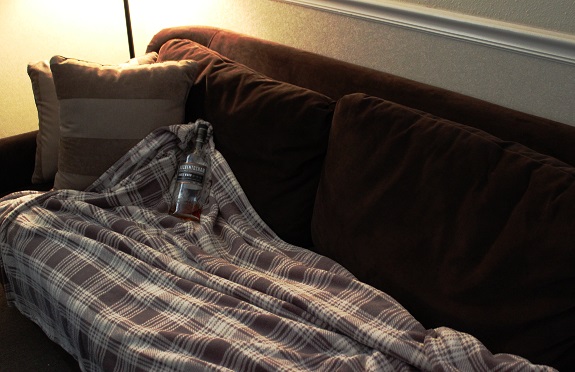 Plugged into a podcast. Kicked off the shoes, and zonked out. Sixty minutes (or so) passed. I snoozed on my back because: A. There’s not much room on that couch, and B. It’s usually the back of your jacket that picks up the wrinkles first, so I wanted to see how it’d do under those kinds of circumstances. Here’s a comparison of before the nap in the name of science, and after the nap in the name in science: Left: Before nap. Right: After. A few creases on the lower back / tail.

There were five or six noticeable, yet not outrageously deep, creases on the lower half of the jacket. But other than that, the rest of the suit seemed to come out unscathed. Pretty sure it’s fair to say that many other suits would have done worse. Not a bad showing, especially if you’re the type to not sweat the small stuff (aka, the stuff no one else is going to notice, especially if it’s not a still shot on a website devoted to clothing).

These new “Voyager” suits aren’t crease proof, nor did they ever claim to be. But they do seem to be decently crease resistant, have a great texture, and possess all the positive attributes of the other Thompsons. They’re also priced pretty close to their worsted wool brothers. Most might want to consider giving one of these new Voyagers a shot over the standard worsted wool Thompsons. But that’s only if they escape being excluded from codes at some point in the future, and thus, drop back down into the mid $200s. Note: Yes, those are black leathers (shoe, belt, watch strap) paired up with medium brown buttons on the suit. Neglected to wear brown stuff on the day of the review/shoot. That combo, while not ideal, can work. Especially if necessitated while travelling. Not worth having a cow over.