J. Crew is touting this as their “big fall event.” And while the discount has jumped from 40% off (they were at 30% off over the weekend,) they’ve also now excluded suits, blazers, most of their shoes… and a heck of a lot more.

For every action there’s an equal and opposite reaction, right? Thanks Isaac.

Doesn’t mean there aren’t some worthy items getting that substantial 40% off. That’s about as good as it usually gets for J. Crew, and there’s even some goods set aside at an eye-popping half off (although those items are decidedly less eye popping in terms of aesthetics).

Let’s dodge all those many, many pesky exclusions. Off we go wi….

WE INTERRUPT THIS 40% OFF SALE POST TO BRING YOU SOMETHING THAT’S 25% OFF BUT STILL WORTH A TOP OF THE POST MENTION: *MEEP* … Okay so admittedly this feels like a bait and switch since they are decidedly not 40% off. But that’s just not gonna happen with their flagship chinos. These things are almost always excluded from sales and codes of any kind. Yet weirdly enough during this fall event they’re at 25% off. No code needed here. Hey, it’s something. And something is something! By far the star of the select 50% off section. J. Crew always comes out with a few shawl collar cardigan / “house sweater” styles each fall. And these all cotton ones look like they could be perfect for bridging the gap between now and when the snow flies. There’s one review saying it shrank significantly in the wash. The solution would therefor be to treat it like you would a wool sweater. Wash it only when truly necessary (see #1 here). And when you do, hand wash it carefully or dry clean only. There we are. About as good as it gets in terms of price for their basic Italian made desert boots. Above image borrowed from a recent chinos chukkas polo post. Also available in an “anchor grey” suede. “sit on the box.”
“ok”
“no, not like that, it looks like you’re on the can. do something, I don’t know, ‘cool.’ Give me a look that says ‘I’m a COOL guy wearing a sweater, and I’m vaguely disinterested in my surroundings.’ “
(… *model leans forward, jauntily sets elbow on right thigh.*)
“That’s IT! C’est MAGNIFIQUE!! Genius! HA HA WE’LL SELL MILLIONS.”

Nice timing now that we’ve hit October. More than a bit of a legend, the Sussex. A quilted, insulated jacket, that leans more heritage-sporting wear and less shiny-puffer.

Yes, vests too. Which is probably the best bet for most climates at this point in the early-fall weather. In case you’re one of the many who has an unignorable “I haven’t tucked my shirt in for X amount of days since I’ve been WFH this week/month/year” alarm which often goes off in your head. It’s a blessing. It’s a curse. It’s like one of those preppy mixed media/half leather half stripey or printed fabric belts you seen in summer. Only it’s for the fall. And now something a little more classic. Both styles are available in two shades of brown, as well as black. One of their flagship products. No slims though. Classic and tall fits only. Looks like team-slim-fit is drawing the short-straw here, because it’s only the straight fits that are getting the special 50% off bump. 40% off for J Crew’s slim cords is still very very good. But yeah. Looks like perhaps the straight fits aren’t selling quite as much as J. Crew would like, so they’ve got them at half off instead of the 40%. That’s speculation of course. Why the price difference? Don’t know. Guessing the Marled Hazelnut’s fabric blend has more wool and a little less nylon or poly blended in. Both classics though. Kinda tough to go wrong with these. 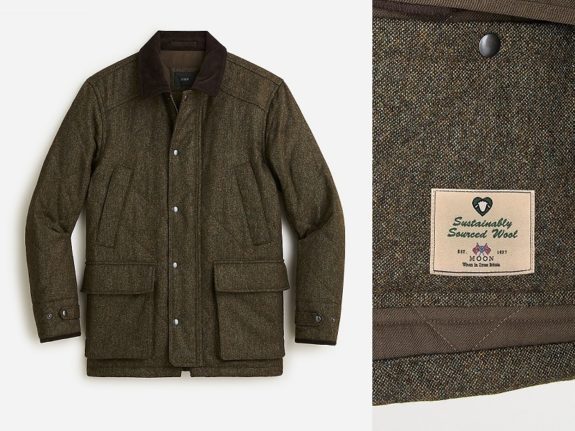 Not a secret wash casual poplin, but not some super starched razor sharp dress shirt either. Best of both worlds. Starting to look a tiny bit Hogwarty. BTW if you want the real H. Potter thing… here you go. It’s good, just a bit boxy. Made for “transitional days.” A little less insulation and warmth compared to their Sussex jacket. They also ditched the standard ribbed waist you find on a lot of bombers. That look can sometimes cinch and ride up and look kinda funny, giving you a bit of a visual, cloth spare tire around the midsection. Not here. Straight hem. And it IS a straight hem. If you want to take it to a tailor, just make sure you’re wearing something like a sweater underneath. It’s a fall jacket. The risk is if you’re wearing a t-shirt you’ll have it taken in too much, and thus will render it useless when you want to layer. Size above is an unaltered medium on 5’10″/185. “Refined” corduroy joggers drenched in fall-season-goodness. Corduroy has been swapped in for the usual french-terry fleece, the scrunchy elastic hems have been eliminated, and they’ve been made in a few versatile colors. Pretty much a Barbour (or any other heritage English sportswear/outerwear brand) homage. Lightweight though. For those who want a “fall shirt” but don’t like the lumberjack-looks of flannel. 100% cotton corduroy. No slims here. Just classic and tall fits.

The 40% off code SHOPFALL runs clear through next Monday, 10/10. Looks like the 25% off deal on their chinos also runs through Monday the 10th as well.