NOTE: Prices on liquor can vary, wildly, depending on location (laws, taxes, availability, etc), so prices shown are an estimated range based on in-person observations and online retailers.

Bourbon is all the rage, but it is certainly a hearty bit of juice to sip down in the heat of the summer. When the August temperatures are soaring and the liquor is pouring, consider the floral and citrus botanical bouquet of gin as a refreshing, bright and light reprieve.

The word “gin” itself is derived from the word juniper, and that should provide a clue as to what the key botanical is. While most distillers will cleverly utilize native flowers, roots, and fruits to the region, almost all gin will have a base of juniper in the botanical selection. Notes of citrus, pine, spruce, chicory, lavender, and salt can all be found in gin. It’s for this reason that gin has exploded in popularity over the last 5-or-so years. Regional distillers have access to unique native ingredients, and the final products can vary greatly in flavor profile. Gin! Looks a little like water. But boy howdy it’s not.

Gin is distilled primarily in two methods: pot distillation, or column distillation. For the purposes of this piece it can be simplified as immersion or vapor distillation. In the former, a parallel would be steeping tea leaves in hot water. In the latter, consider the heat rising from a flame into a wax melter. Immersion distillation flavors the juice by sitting the bag of botanicals in the distillate, essentially as a second distillation. Typically, a pot distillate has a lower abv due to the second distillation. In a column still, the alcohol vapors will pass through a suspended gin basket to extract the botanical flavors. I have found it to be a more delicate flavor, and higher alcohol content.

Neither method is “best.” Distilling is an art, and different distillers will use different techniques and tools to create their personal masterpiece. Bluecoat gin is a take on the traditional London dry from a distiller in the birthplace of the American revolution, Philadelphia. With this version, Bluecoat adds elderflower to the already delightful base gin. This inclusion becomes the most forward aroma and flavor. Truly, this could serve as a replacement for St. Germain in cocktails calling for that liqueur if not for the difference in viscosity. Consistent undertones of juniper, with a hint of lemon join the party, making this an excellent choice for a Philly Lemonade.

A New Take on an Old Favorite: Hendrick’s Neptunia Gin – $45 If you’ve been in a liquor store, you’ve likely seen Hendrick’s gin. Recognizable for it’s medicinal looking bottle, Hendrick’s has long been a staple in mid-shelf gin, offering great bang for the buck and a clean, fresh taste. In recent years, the distillery has been producing limited editions in the summer, and the latest is their Neptunia gin, named after the “God of the Sea.” This edition is said to leverage botanicals most often found in coastal regions of Scotland, though no official botanical information is available except the inclusion of cucumber – something common among Hendrick’s gins – as well as mint and elderflower.

Given the inspiration for the edition, I expected a saltier-than-average gin, but was left wanting. There is far more citrus than expected, with flavors of lemon and orange, as well as….grass? Perhaps sea grass. The elderflower is EXTREMELY subtle, an appreciated departure from the Bluecoat above. A curious gin, but one I heartily recommend for now, as well as later in the year. Norway isn’t the first country that comes to mind when considering gin, but aquavit is Norway’s distillation claim to fame, and not too far off from gin. In that context, it makes good sense that a delightful gin would come from Norway – and Harahorn is it. The gin is named after a mountain in Norway, which itself is named after what we Americans call a “jackalope.” A moose-horned hare. The bottle is beautiful, and the name is unique – but how about what matters most? How’s the taste?

Using native Norwegian botanicals, the gin itself is a delightful melody of citrusy pine and berry sweetness. Harahorn uses juniper, blueberry, rhubarb, marjoram, and angelica root. It’s a unique bunch of botanicals, one that comes in a creamy, rich mouthfeel to complement the excellent flavor. This took second place in this summer’s sampling of gin. It sure does look pretty, doesn’t it?  The label screams vintage, while the pink hued juice inside looks sweet as can be. The Harahorn is a good looking bottle, but this takes the cake. I love that Thames Distillers, the team behind the bottle and gin inside, makes clear the botanicals used in the distillation: juniper (duh), angelica root, star anise, cassia bark, lemon, orange, coriander, and spiced bitters.

In doing so, there’s a nice balance of pine, spice, licorice, earthiness, and citrus. I get notes of black pepper and spice, with a citrus hit. Sort of like a fall cinnamon orange muffin. This would work nicely in a gin punch, or an interesting twist on a gin martini. Not a breathtaking gin, but a great buy for the price point. 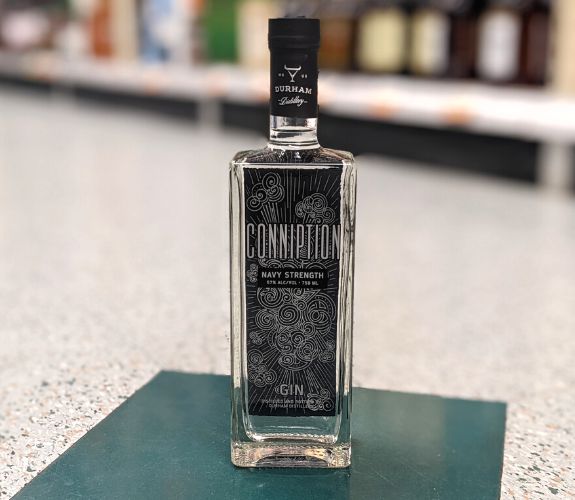 The highest alcohol content of the bunch (57% ABV), this navy strength gin from Durham, North Carolina packs a wallop. Conniption gin is SPICY and has a lot of heat. Using juniper, fig, cardamom, rosemary, cassia, and caraway seeds, this navy strength gin is an intense spice bomb that remains fairly balanced despite the botanical selection. Because of the high ABV, I’d reach for this for a full bodied, elevated gin and tonic. Throw in a lime wedge, and sip nice and slow. By far the most surprising of the bunch. The unassuming exterior appearance hides an exception gin, one that is possibly the forerunner of the American gin movement. Admittedly, I had not previously heard of No 209 Distillery. Quickly doing some research, I’ve discovered the team out of San Francisco has been producing high quality gin for 17 years, WELL before the onslaught of distilleries producing new gins. Choose this bottle for a gin gimlet. With citrus-first flavors bursting upon first taste, followed by juniper and mint on the finish, this gin has a hearty, yet bright flavor that satisfied even on the hottest of August days. I certainly haven’t had every American-distilled gin widely available, but this might be the best of the bunch. Certainly, it’s the top pick of this litter, both foreign and domestic.

Distilled by Caledonia Spirits, the name is a throwback to an age of adulterated gins, wherein distillers used any number of ingredients to “sweeten” a gin to make it more palatable. This was known as the “Old Tom” style, and Caledonia invokes the spirit of the style in a decidedly American way.

After distilling the base spirit – which is distilled with only two botanicals, loads of juniper and raw honey- Caledonia dumps the juice into virgin American oak barrels – just as bourbon distillers across the country do to age those whiskies. The resulting color is unlike anything you’re likely to find on your liquor store shelves in the gin aisle, even among other barrel rested gins.

The nose has huge, bright notes of juniper – just as a proper gin should. On the tongue, you’ll get strong pine flavors, accompanied by oak and vanilla. The latter two certainly coming from the barrel.

If you’re inclined to sip your gin and experience the full aroma, flavor and feel of the spirit – this is the bottle to buy. Terroir is derived and inspired by the dense forests of the Northern tier of California. Douglas fir, sage and bay laurel take center stage in this botanical blend to drive the forested flavors, and do so with a delicate excellence. St. Geroge separately distills the Douglas fir and sage in dedicated stills, and then vapor distills the other botanicals. Neat. The full list of botanicals is not listed, but coriander, bay leaves, and the foundational juniper are present. All work in concert to create a rich, earthy flavor. There is not much spice or citrus to this gin, so know that when planning your drink. This can certainly do well in a standard G&T, but this would be best served with berries of the bramble, such as blackberry or raspberry, for the full effect. Gin for a mountain getaway, if you have one last one planned before summer vacation time expires. Bottled at an ideal 90 proof.

About the Author: Jason P. spends his days working in the creative marketing department of a big telecom company. He also does a bit of real estate investing on the side. He believes in curating a timeless, classic wardrobe with subtle modern touches for today. He and his wife love hiking with their dog and shopping at local small businesses and antique stores when they travel. Jason is a practitioner of muay thai and traditional boxing, and his favorite drink is a hoppy New England IPA