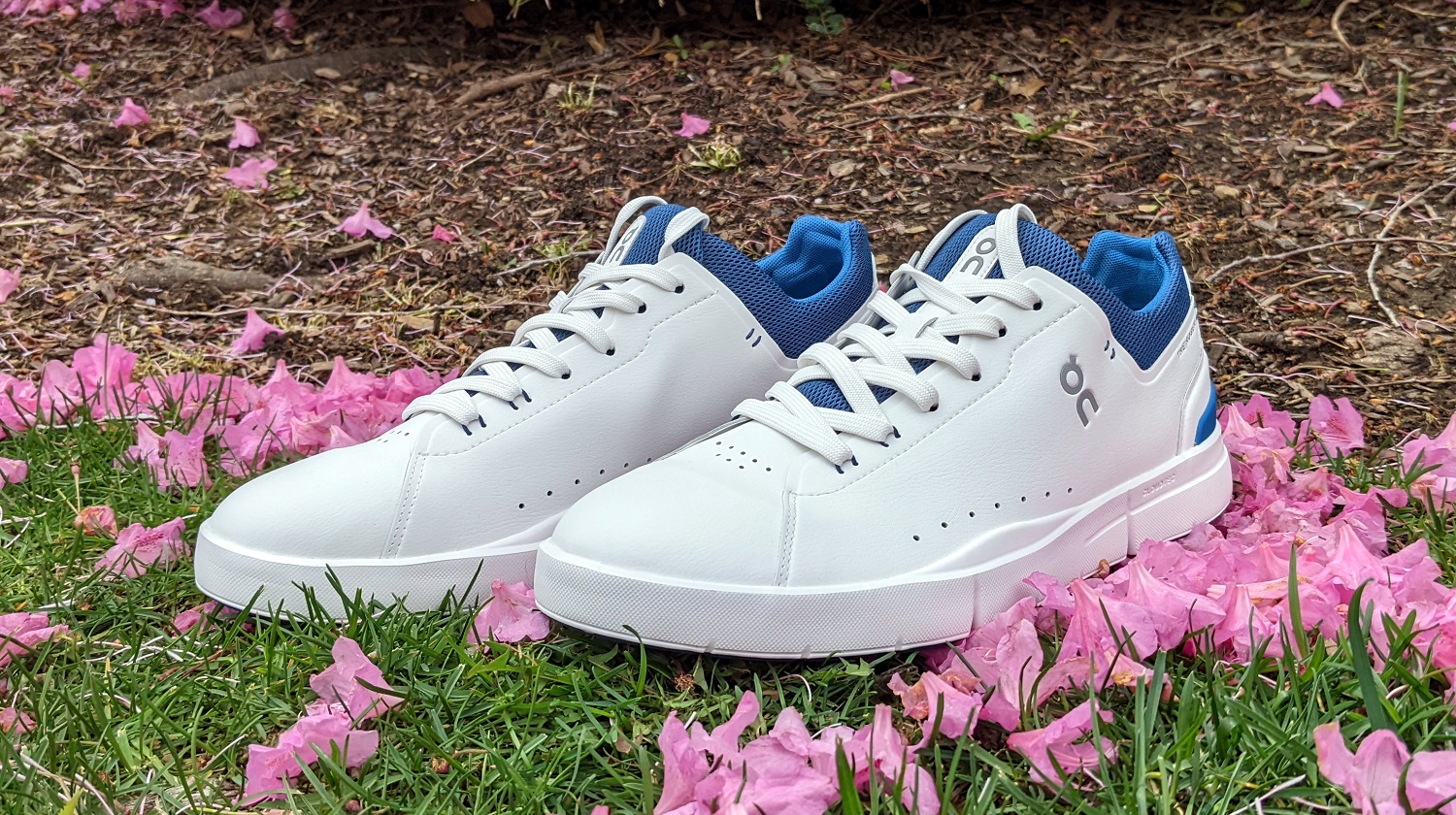 On running has taken the athleisure scene by storm over the past three-or-so years, and for good reason. I recently bought a pair of On Cloud X to put to the test and have been converted to the ever-growing acolytes of the brand. The comfort and support are for real, and they have an “X” factor the major sneaker brands simply can’t match.

But their proprietary, toothy, pod-based soles aren’t for everyone in terms of the looks department… ^^NOT the Roger tennis sneaker being reviewed.
One of Cloud’s famous running shoes, with their unmistakable “CloudTech” pod system.

But upon my discovery that On has partnered with tennis legend Roger Federer to craft a college of classic looking tennis sneakers leveraging the On cloud technology, I had to order a pair to take for a spin. A white tennis sneaker is a summer staple for most men, with the venerable Stan Smith from Adidas arguably the GOAT. Can an upstart, backed by a legend in the sport, dethrone the benchmark? At the very least – is it a worthy contender? For the uninitiated, On sneakers utilize “Cloudtec” cushioning pods in the midsole. In “The Roger Advantage” (the name needs work), one would be forgiven for thinking the brand has eschewed the signature technology for a more classic setup. As pictured above, from the outside the midsole looks to be a fairly basic tennis shoe, with a few flex grooves integrated for improved mechanics on the move. Those grooves are much appreciate – and do seem to aid in the overall comfort – but they are just one piece of a very busy midsole. Flip over the shoe, and the trademark technology of the shoe is fully visible. It appears that the signature pods are reserved for the midfoot and feel, albeit in a reshaped form from the typical On running shoe. The entire midsole uses the same foam in the forefoot as the heel, and while it isn’t indicated to be On’s “Helion” energy-returning compound in their athletic lineup, it feels like a more firmly-tuned version of that foam. Running the length of the shoe is something On calls “Speedboard,” which is essentially a stabilizer plate. On doesn’t give much detail regarding the plate, or board, but the exposed portion sandwiched between the outsole and the topsole feels soft to the touch. Based on the price point and intent of the shoe, it would be safe to assume it’s a fairly standard TPU plate. Certainly, the implementation of myriad cushioning technologies in the shoe doesn’t feel as athletically-capable as the actual runners and trainers in the On lineup; however, these are by far the most supportive and well-cushioned casual tennis sneakers I’ve worn. If cushion is the end-all-be-all in your summer sneaker search, these are a grand slam. Fantastic cushioning. They deliver there. But…

The midsole is elite, but that’s to be expected from On. The upper materials and construction leave a bit to be desired for my feet, but your mileage may vary. They aren’t bad, just…polarizing. Overall, The Roger Advantage looks the part. The overall aesthetic is modern, clean, and infused with classic tennis styling. Perforations in the leather and elastic fit bands on the bottom eyelets hint at the sneaker’s performance origins. One of the areas On has excelled at from its inception, and a key driver to its hype and rapid adoption, is the considered construction and attention to detail in simplicity. There are small flourishes that stand out to feel premium, like the small Swiss flag on the right shoe, and the embossed, reflective logos and tight stitching on all panels. “Vegan” leather uppers feel thin. Not as premium as the rest of the shoe.

But, On made a few odd construction and material choices, first and foremost with the collar. On utilizes a bootie-like construction with a partial bootie hugging the sides of the foot, while laying an equally thick tongue on top. You can see it in the photo above and below, this creates a VERY thick double layer of foam and mesh resting on top of the foot. The end result is heat and bubble-effect to the “leather,” which On has attempted to rectify with two small strategically placed stitches. It looks, and feels, over-designed. 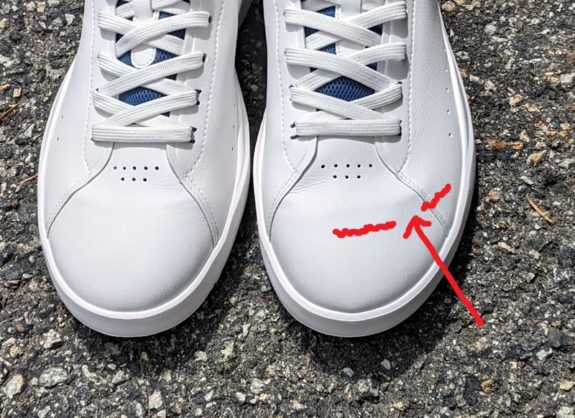 If your buying priorities lean heavily toward sustainability, you’ll be pleased to know On uses a synthetic vegan “leather” upper, roughly 65% of the polyester content is recycled, and a total 10% of the shoe is made of recycled materials. I’m in favor of being evermore mindful of our environmental impact in consumer consumption so I do appreciate it. That said, the synthetic upper leaves much to be desired. Adidas’ Primegreen upper on the Stan Smith feels significantly more premium despite that shoe costing 40% less. This vegan leather is thin and doesn’t inspire confidence in terms of durability. One of my shoes arrived with, to me, a significant defect/crease in the toe.

Foibles with the upper aside, this shoe has the locked in feeling of a true athletic sneaker without feeling squeezed. There is ample ankle support, and the base of the shoe is wide and flat for stability. There seems to be a good amount of arch support as well, though that could also be where the Cloudtec pods begin in the midfoot.

As for sizing, the shoe fits true to size, albeit a little snug due to the overlapping ankle collar and tongue. I’d suggest going true to size. I wear a size 10 in my trusted Stan Smith, and would not want to go up a half size in the On Roger to compensate for the extra padding. #thicc As expected from a shoe designed in partnership with one of the greatest tennis players of all time, this is truly a tennis sneaker you could wear for a full day of walking. Sightseeing around a city or roaming around a major theme park this summer are two places this shoe would feel right at home while sharpening up your outfit for the day.

For $140, is the On The Roger Advantage worth the cost of entry? For me it was an easy No. Yes The Roger’s cushioning is great, but there’s simply no shortage of alternatives in this category. Namely, the aforementioned Stan Smith for $45 less. Truthfully, for the money, I can’t understand why anyone would buy something other than Stan Smith.

On serves up a casual tennis sneaker, and despite delivering on their brand’s cushioning specialty in a much more subtle package, this author returns it. Hopefully the next set will be better from On.

About the Author: Jason P. spends his days working in the creative marketing department of a big telecom company. He also does a bit of real estate investing on the side. He believes in curating a timeless, classic wardrobe with subtle modern touches for today. He and his wife love hiking with their dog and shopping at local small businesses and antique stores when they travel. Jason is a practitioner of muay thai and traditional boxing, and his favorite drink is a hoppy New England IPA.