Note: Nodus will start shipping these things on June 15th. But for those who put their order in before the 15th, they’ll throw in one of their $55 Hybrid TecTuff Rubber Straps for free as a thank you.

Nodus is a growing microbrand based in Los Angeles that seems to do everything pretty close to just-right. Terrific designs. Great components. Their attention to quality (regulating & stress testing the movements, assembly happens here in the United States) is impressive, and perhaps most importantly for the website you’re reading now…

Their watches are actually affordable.

And all of that seems to be reflected in the new, slightly beefed up Retrospect III. The Retrospect is their diver. All the good looks, water resistance, and versatility a dive watch brings, delivered in a unique design that still doesn’t rock the boat. Even if the watch is very much built to go over the side and under the surface.

The just released Retrospect III now sports a 42mm bezel on its 40mm case, but despite that extra heft, the geometry helps it wear better than its predecessor (you can read more about that on their blog here). It really does sit great on the wrist. Some muscle for sure at 13.9mm thick, but sneaky sleek. Like a linebacker that can cover ground at all-pro speed. 42mm bezel over a 40mm case.
13.9mm thick, so it has some presence. But super comfortable on the wrist.

Powered by Seiko’s NH35A automatic movement, it’s dependable, hacks and hand winds, and is regulated in four positions to +/- 10 seconds a day. Water resistance is a welcome 200m, and the screw down crown that makes that happen threads great, feels good, and winds with purpose (no wiggle wobble or greasy sliding feel). 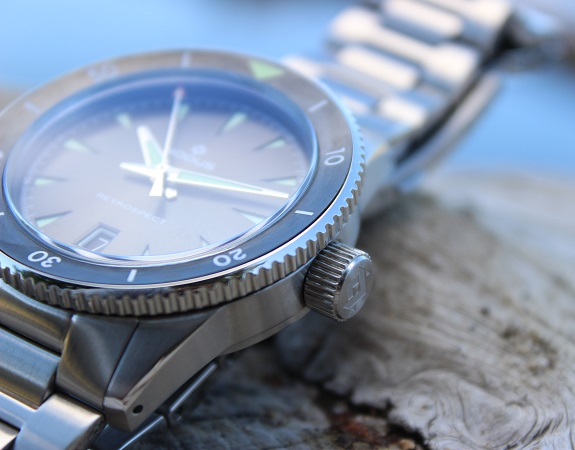 Crystal is a double domed sapphire, and the 120 click bezel is crisp with each click, while also not being impossible to move. The slightly inward sloping bezel is a really nice design element. It’s subtle, and looks great as it quietly slides into that double domed crystal. The clasp and bracelet is one of the best you’ll find at this price point, and they’ve made it a quick release this time. Which is perfect for those who like to move easily between bracelet and a rubber or NATO strap for summer. One of the best clasp/bracelets at this price point. Quick release at the lugs too.

Two other small bits to point out from the “looks” department. They ditched the yellow seconds hand that was on the Retrospect II. Here on the III, it’s a more subtle silver, with either a red, blue, or black outlined arrow at the end. Not as sporty as the yellow, but a heck of a lot classier. As is the RETROSPECT font at 6 o’clock. Spacing is important, and they nailed it here on the new III. Nodus has staked out a pretty unique place in the watch world. Great designs, quality materials and movements, and they really do care about the product with their assembling and regulating being done here in the USA. Even the upon-arrival presentation is impressive. As the middle continues to get squeezed, it’s great to see a proud brand like Nodus stand up and make something that if you pay a bit more than entry level, you’ll get a lot more in return. All while steering way clear of luxury prices. And the new Retrospect III is a mighty fine representation of all of that.