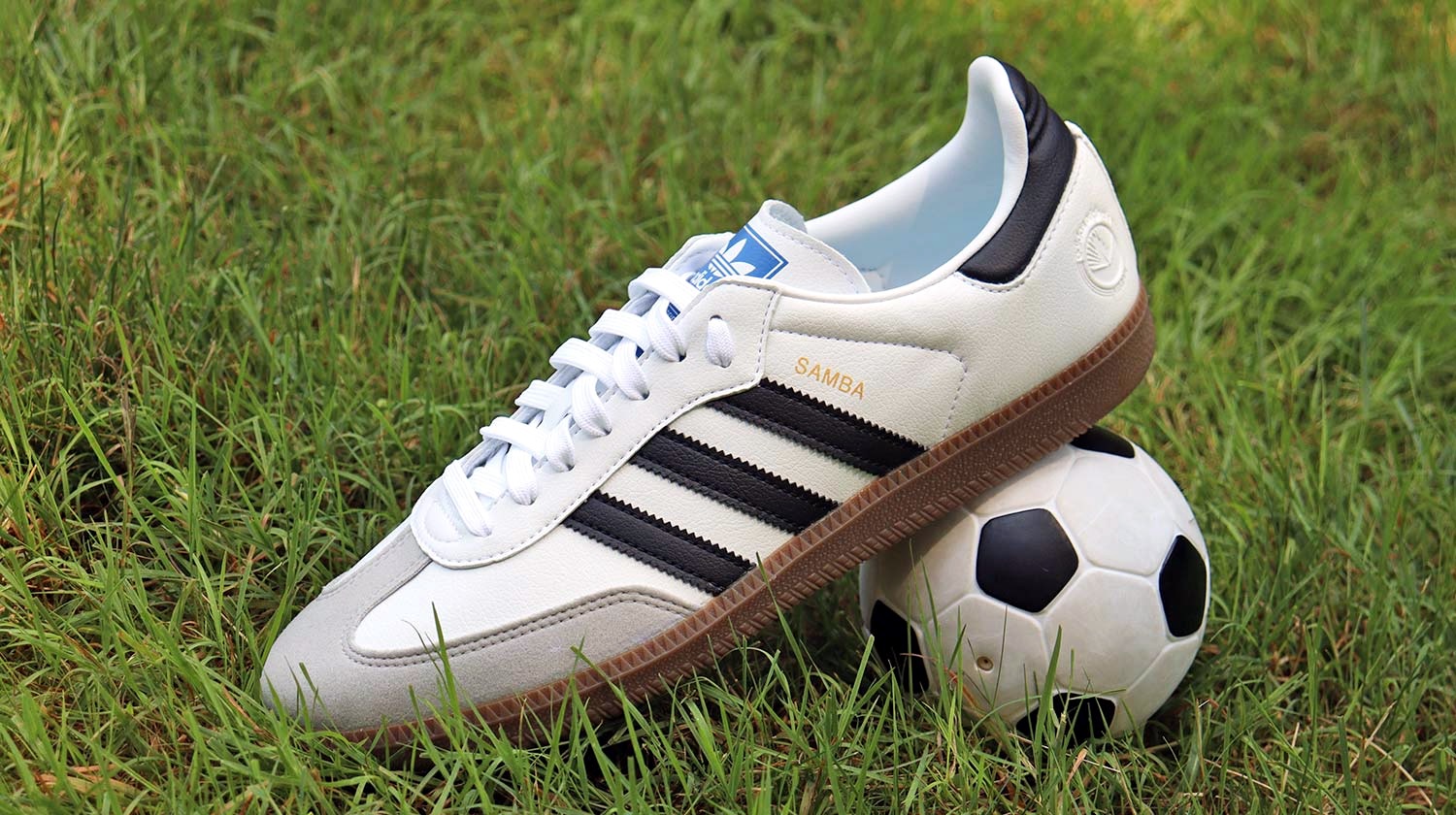 As somewhat of Dappered’s “animal-free” guy, I’ve become interested in products that take familiar menswear stalwarts and manage to create a similar or near-exact replica without the use of leather. When Adidas set out to remake the iconic Samba OG sneaker with completely animal-free materials (no leathers, no glues/colors with animal derivations), they knew that had to nail it. It’s one thing to make a sneaker out of vegan materials. But to remake such classics as the Samba, the Superstar, and the new-Dappered-favorite Continental 80 without leather? That takes a lot of planning and solid execution. And did they ever nail it. The Adidas Samba in Vegan Leather. Only available in Cloud White for now.

Right out of the box, these look, and feel, exactly like the Adidas classic. The materials feel excellent in the hand, have a substantial enough weight to them that they don’t have that “artificial” feel that some faux-leather shoes can have. Honestly, if I didn’t already know I was holding vegan shoes, I’m not sure I’d believe you if you told me. These aren’t your big-box-store, plasticky-leather, $25 facsimile of a popular shoe. These obviously have the same attention to detail, material selection, and construction as their leather counterparts. I ordered a size 9.5, which was all that was available at the time, as my normal 9 was out of stock. In terms of the fit, they’re a classic, narrower fit, and they’re actually pretty perfect. I’d order your normal size in most cases, but there’s a chance these run a touch small. I haven’t ordered Adidas in a while, nor do I have any in my closet to compare, so take that with a grain of kosher salt. A bit difficult to photo, but that leather grain is top-notch. Very well-done and impossible to tell.

The “leather” itself is what surprised me the most – but then again, it should, given it’s the cornerstone of any vegan leather option. But even so, I was expecting to catch a repeating, recognizable pattern of leather-wrinkles to give it away, but I can’t find a single repeat. This actually presents like a unique piece of leather. You’ll also usually have some laser-cut edges, indicative of the fabricated nature of the shoe. But here? The pieces look almost hand-cut in their inconsistency. Lots of care was taken here for the shoes not to appear mass-made. Cushioned well around the ankle and heel pull.

From a comfort perspective, the “leather” has been conditioned in a way that it’s not stiff out of the box. There’s ample padding, from the reinforced heel pull and ankle bracing to subtle arch support. The tongue is not padded, but it’s always been that way. The insole itself is firm but forgiving, as you’d expect from a classic soccer-inspired sneaker where agility is a requirement. I’m a fan of the gum rubber outsole, which looks like it can take a beating while staying grippy. The “Adidas Vegan Originals” stamp is subtle and relatively minimal.

The only outward indication these are vegan is a shadow-stamped “Adidas Originals Vegan” insignia on the back flank of the shoe, and it’s not as present as it can appear on the website photos. The golden letters “SAMBA” running up the stripes match their leather counterpart, and the black-and-white colorway remains the shoe’s signature look. The one disappointment: The “suede” accents are uninspiring. Almost… felt-like?
What is this, arts and crafts?

The biggest disappointment for me, given the stunning quality of the leather, was the uninspiring suede in the trademark T-toe. Yes, vegan suede as a whole is easier to get away with than vegan leather; however, I found the opposite true here. The suede on the Samba OG is rich and nappy, so the flat, uniform, felt-like appearance of the suede on the Vegan Samba takes away from what could have been complete aesthetic precision. There’s almost no nap at all here. Getting all the little details right. Those gold SAMBA letters look great.

Now, vegan suede can look fantastic and real. Look no further than the nap on the Banana Republic Vegan Suede Bomber. Or ogle the gorgeous suede on these vegan sneakers from London clothier Will’s Vegan Shoes. It’s clearly possible, and such a small sliver of shoe material couldn’t have added much to the cost – so why didn’t Adidas take the time? Even Old Navy takes the time. Not necessarily a deal-breaker, but it’s disappointing and feels like an afterthought. Not to mention, the right shoe came with a small scuff or glue spot, unnoticeable on nappier suede, but stands out a bit here.

Put it all together, though? You’ve got one heck of a facsimile for the “real deal.” Just be aware the suede isn’t what it could be, and wait for a sale.