Up to 50% off Nordstrom Made Brands

Another unusual sale. The unusual is almost becoming usual. Almost. But this still feels unusual. Because it’s coming from Nordstrom. They just aren’t the type to perpetually run sales and events. In the past, they’ve usually limited their big savings events to their two half-yearly sales (end of winter and summer clearances), and their massive Anniversary Sale, which is a fall preview of sorts.

This? This is limited to their exclusive in-house brands. But that is NOT a bad thing. Hardly. Nordstrom isn’t JC Penney. They aren’t Kohl’s. They aren’t Macy’s. Not to sound snobbish, but they really are a step above. That’s just the truth. So the stuff they have made, exclusively for them, feels better than what you’d find at competing department stores. Off we go with some picks. And despite the pretty significant price drops, all of this ships and returns for free. Inexpensive, basic, 98% cotton + 2% stretch chinos with a bit of a brushed texture to them. Not bad for $125, and quite good for the on sale $62 price point. Sleek. Oddly comfortable. Made in China but doesn’t look, feel, or smell cheap. A bit of subtle grip on the sole too, so you’ll stay upright on carpet/wet sidewalks. There is a chisel toe, so, traditionalists beware. A size 10.5 fit my normally 10.5D feet out of the box extremely well. Slubbed texture, totally unlined back, and should see plenty of use in the warm weather ahead. Their not classic fit, not extra trim fit, right in between athletic “trim” fit dress shirts with their smartcare fabric. I wouldn’t call it a true wrinkle free (which can be stiff and icky feeling), but instead something that’s easier to care for than a standard dress shirt fabric. 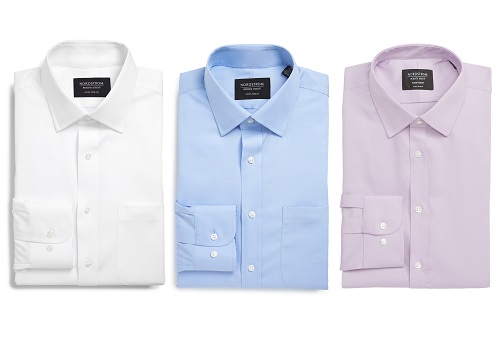 Remember NO FEAR t-shirts? Right. This isn’t those. Something for the spring and summer months. 52% wool, 34% lyocell, 8% cotton, 6% linen. Trim Fit here, so, hopefully you can get away with not having it tailored? Just half-lined in the back, which is great for warmer weather. Seeing these at half off is really unusual. Stand alone all wool trousers for the white-collar crowd. Made in Italy too. From the in-house yet still pretty top notch John W. Nordstrom brand. Seven colors to pick from. These are nice pants. Very nice pants. OCBDS… which ship and return for free. Whee! All hail the knit blazer. More polished than most swazers though. 53% cotton, 38% nylon, 9% spandex. Totally unlined back Made in the USA. All kinds of right. Not clunky or flashy. What a belt should be. For when your boss or your significant other cranks up the AC to absurd levels. Sheesh, I feel like Roald Amundsen in this icebox. It’s happening. Available in navy, charcoal, or black. Also, if over-the-calf isn’t your thing, they do have the mid-calf version for half off too. Five colors to pick from there. Saw these getting another markdown the other day, but didn’t pick up on the fact that it was a precursor to a larger sale-event. Was on sale for $35 during the spring sale, now $28. From their tech smart line. Subtle herringbone pattern for a little visual texture. Extremely well reviewed. 81% cotton, 12% polyester, 7% spandex. FIFTY? Okay then. Made in Italy, believe it or not. Waterproof too. Not bad for a basic, do anything, gray suede chukka. This “lifestyle” shot shown above makes them appear much lighter, than the basic white-background shots look. But suede is notoriously fickle to a camera lens. Trust me. I have given many a stern talking to to suede shoes, who weren’t cooperating during a photo shoot. And you talk to shoes, just once, in an alley, and people think you’re driving the monorail to crazy-town. Listen lady, what do you want me to do? They’re being difficult! For those that don’t want to shell out for the Allen Edmonds brogue belts. Inexpensive. Versatile. 55% cotton, 45% nylon fabric. Super relaxed. Like, not really a blazer at all. Really, it’s a sweater. Wear it and use it like you would a cardigan. Probably what Clive wears on the weekends at home, with some peached chinos and a striped t-shirt, while making perfect bacon egg and cheese toasts. Listen, TeamSweatPants doesn’t need to get all crinkly about Clive living his best life. He’s not doing it to make sweatpanters feel bad. Clive just Clives. He honestly doesn’t care about you or your Polaris Rzr. Care for some Cheesey Bacon Egg Toast there Honky Tonk? For those who haven’t made the jump to tech or merino underwear yet. I understand the hesitance. I really do. But it’s nicer on this side guys. Cooler. Less sticky. Scro mo swamp-crotch if you get me. But yeah, if you’re still on team cotton, here you go. Made in the USA by Woodlore, which is an Allen Edmonds company. And since it’s Nordy, they ship for free. And with that AE sale also running, you’re gonna need some new shoe trees. Big thanks to Scott S. for the tip here.

UPDATE: AWWWW MAN THEY SOLD OUT. Dang it.

The Nordstrom “Better Together” exclusively for Nordstrom sale ends tomorrow, Saturday morning (4/11) at 9am ET. So hop to it, if you choose to hop at all.