LEARN: Made in America. Here’s how it happens.

Forget about the cowbell. The cymbal is one of Rock & Roll’s most important instruments (here is one of the masters of the art). And when it comes to the flashy percussive favorite, Zildjian is the best of the best. This is a pretty cool video of how these cymbals are made in Norwell, Massachusetts. Once again, a tip of the hat to team Laughing Squid.

Great news right? You’ll just have to wait until this Monday (8/26) to see it. I think you’ll manage.

READ: The psychology of wearing a watch. 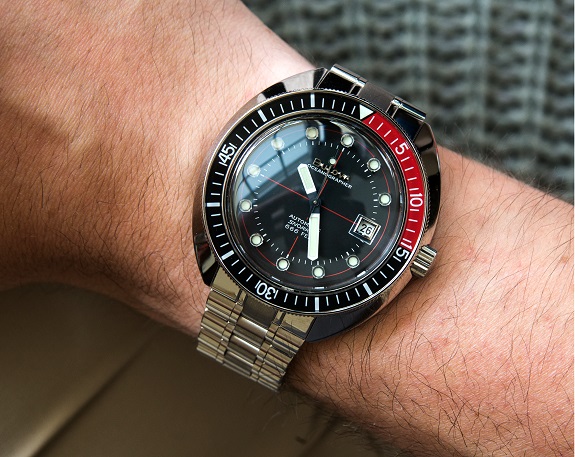 We all have our own reasons for wearing a watch. Mine have evolved over the years. Lately I’ve been a slave to technology. And frankly, the experience is no longer very satisfying. I have been leaving my connected watch at home in favor of a couple favorite chronographs. Dappered reader David C shared this interesting perspective on wearing a watch in response to reading this post from last year. Thank you David, suggestions are always welcome. (Watch shown above is Bulova’s “Devil” Diver.)

I may have mentioned before that as a kid I was brought up by a mother who thought there was never a recipe that didn’t require mayonnaise. I never made a conscious effort to cut it out of my life, nonetheless, it kind of happened. Mostly. And then I was introduced to Mexican street corn. I now have some Best Foods at the house. Because from the first time I had one of these golden ears of marinated magic, I’ve searched for a recipe so I could make it at home. Voila.

This is one gory movie. It is not for the squeamish. I am a JJ Abrams fanboy so this was the reason I watched a movie about a ragtag group of American soldiers dropped into German occupied France a couple days before D-Day to…uh…fight German engineered super-soldiers which just happen to be zombies? The movie drops you into the action headfirst and the opening 15 minutes are absolutely bonkers. It’s violent. And gruesome. But it is no b-movie. It’s well filmed. The production values are really solid and the cast is a good mix of actors you know along with some new faces.

Also, because I hardly ever watch a movie without having the IMDb page right next to me, I learned that one of the main actors is a guy named Wyatt Russell who used to be a professional hockey player before becoming an actor. That would be Russell as in Kurt Russell and Goldie Hawn, his parents. The moment you know this the resemblance cannot be unseen. Genes, you know what I mean?

Tim Johnstone is Dappered’s music correspondent as well as our resident gatherer of all things interwebs related. He’s pretty sure about some of the things most of the time, but totally clueless about everything else all the time. But he does commend this woman for doing the right thing.