Or, join one. I am seeing more and more of my friends joining bookclubs or starting their own. This is a good thing. There are many benefits from being part of a bookclub. There are some good resources out there for guys interested in getting one started and you can find recommended titles here. More and more books now feature bookclub notes, either in the book itself, or online. I really enjoyed the last one I was part of. I read books I never would have otherwise and was glad I did. While food and drink are a regular feature of most clubs, ours made it a point to bring food that matched the locale or geography of the story. This is harder to pull off with some nonfiction books, but it was another aspect of the activity that we looked forward to. You can arrange the club anyway you’d like. Read whatever books you like. And then get together and trade thoughts about what you’ve read sharing that shared experience.

SWEAT: Thor wants you to be your best self.

No, this new app didn’t pay to be here. But it does look like it could be the next… thing? Maybe? Chris Hemsworth, his wife Elsa Pataky and his trainer Luke Zocchi have launched a lifestyle app called Centr. They have collaborated with celebrity chefs and elite trainers and well-being experts to bring people a roadmap to a healthier and happier life. Workouts are customizable and tailored to each person’s fitness level. “From the moment we’re made, we’re not finished…We’re all different, but with one inherent power in common: a choice to be a work in progress…to be a human doing rather than a human being.” The program aims to “take the guesswork out of fitness.” The app includes 24/7 access to support and motivation. That’s impressive. If you pay upfront, Centr is $10 a month (a year subscription is $119). That seems like a reasonable price. There is a free trial so you can get an idea of what Centr is all about. 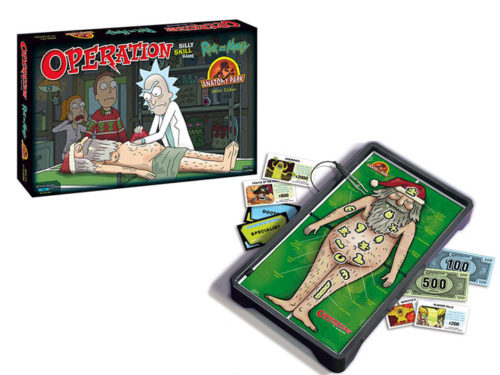 This is not your grandfather’s Operation. Nope. This is another genius offering from the folks behind Rick & Morty. This particular version of the classic game comes with a 17+ age recommendation. And it is based on the third episode of the first season of the show. Instead of operating on the poor pear-shaped red nosed bastard of yore, you will be taking twitchy tweezers to Ruben. Szechuan sauce not included.

LISTEN: Remembering the musician who disappeared from view.

Mark Hollis, along with his band Talk Talk, was responsible for one of the most remarkable musical transitions over the course of their time together. Hollis died earlier this week at the age of 64. Hollis was the main songwriter and singer. Their early records were stuffed full of memorable synth-pop hits like “Talk Talk,”  “Life’s What You Make It” and “It’s My Life.” They were omnipresent on MTV and the college radio scene. You could hear the steady evolution of their music over those first three records, whereas Talk Talk’s last two albums found Hollis exploring a sound that included elements of jazz, art-rock and ambient pop. Those albums, Spirit Of Eden and Laughing Stock are considered modern classics. They have been hugely influential to many contemporary artists. These particular albums are not to be consumed as background music. With their quiet structures, these songs require attention. It also becomes much more rich with repeated listenings. Hollis was a musician’s musician and his legacy can be seen in the many responses to his death among many, many artists.

READ: Breaking up is hard to do. But it’s worth it.

Thanks to reader Brandon D. for passing this along. I’m guessing that more than a few of you have wondered if being tethered to the world in such a manner is worth it. Your phone can be demanding, an attention vampire of the worst sort. Disconnecting might seem like an impossible task until you do it. By the time you realize you’ve done it, you realize you don’t miss it as much as you thought.

Tim Johnstone is Dappered’s music correspondent as well as our resident gatherer of all things interwebs related. He’s currently chasing his spirit animal. He is not a fan of pudding. But he does love himself some Siouxsie Sioux.