About the Author: Ariel A. is a mechanical engineer and father of 2. He designs components for windows and door systems for high rise buildings and gets a kick out of seeing his projects stories high in major cities. He compulsively researches everything he buys and gets a lot of his daily enjoyment from using and wearing items that are thoughtfully designed and well made.

As residents of the great white north, us Canucks understand that cold isn’t just a phenomena, it’s a spectrum. It has sub-categories and classes, from the familiar “first day you know summer’s gone” to the extreme “I don’t think we bought a long enough thermometer” rating. There’s “going back home to get a third sweater” weather, and there’s “I’d really like to come over, but I’m rather attached to my extremities and prefer to stay that way” weather. There are a few ways to deal with this, but most agree that a graduated and layered approach works best. Oh, don’t get me wrong, there’s definitely a few people I know who use the same coat in all conditions as soon as the mercury drops (heck, I was once one of those), but as a general rule that tends to make things heavy and uncomfortable. 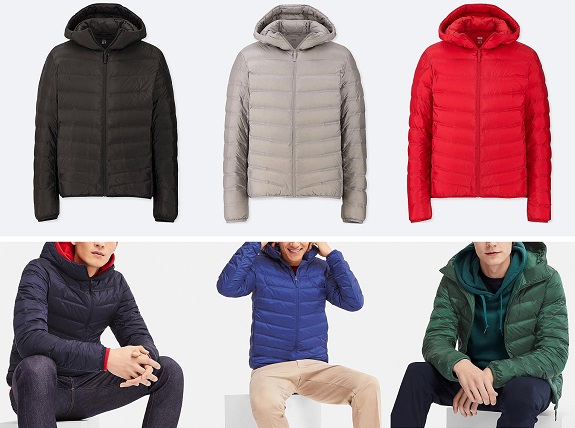 UNIQLO’s Ultra Light Down Seamless Parka. More than a few colors to pick from.

Until recently, my go-to fall/spring weather to zero-ish degree layer was a wonderful heavy Israeli army fleece from a surplus store. It performed impeccably for about 9 years until recently when I broke one of the zippers. Over my years using it, I noted a couple of issues with my treasured jacket, namely the lack of a hood (key for snowy weather), the fact that it was heavy, and that it was too bulky to fit over or under most other layers.

Fast forward about 4 months after the tragic zipper event to a Dappered-prompted trip to Uniqlo to peruse the Airism sale of the underwear that had been so well reviewed. Arms full, I headed over to the register, but was distracted by a display labeled ‘ultra-light down’ jackets. I’ve heard about the marvelous insulating power of down, but have never really experienced it myself because a) down outerwear tends to be a bit on the pricier side and b) I didn’t need yet another coat/sweater/jacket. This time however, I was down one treasured piece of outerwear, and the display showed a price of $90 (Canadian dollars, remember). I also noticed a number of variants, including a ‘parka’, which was basically the same jacket with a hood. Since it was still summer, I left it on the shelf. When it went on sale for $80 a few weeks ago, I caved. This thing is light. I’m not sure of the actual weight, but it feels like wearing clouds held together with spider silk. There are lighter options out there, but I really can’t imagine it making a big difference to me. I don’t know how durable the nylon shell is, but it feels thin, and pretty fragile. This may just be a factor of it being ‘ultra-light’, but I worry about ripping the coat if I snag it on something.

The hood is a definite plus for me, as are the generously sized interior pockets, which I’ve used to carry around a book or iPad mini. The cut is slimmer than I expected, but generally fits me well, and can still fit a chunky sweater underneath for colder weather. Unlike some similar jackets , this one doesn’t look really puffy, which to me is nice from an aesthetic perspective. It’s also compact enough to fit under my leather jacket in freezing conditions. I could definitely see buying one of the vests to go under my topcoat (though this might be a somewhat strange fashion statement). Over the last month, I’ve been able to test the coat during the first real fall weather. It performs extremely well in chill weather, to the point of actually being too warm at around 12-15 degrees Celsius (50s in Fahrenheit). If the temperature warms at all, I have to take it off. I’m also happy to say it performed well during a light rainfall, easily keeping the water out. In all probability it won’t be the solution to heavy rain or snow, but I’m confident it can protect me in most weather.

One of the areas where this coat blows my old fleece out of the water is the fact that Uniqlo made it packable. Included with all of the ultra-light down products is a little drawstring bag that the item can squish into for travelling. This is really convenient, and will likely make a great airplane pillow when I travel with it. The jacket can be packed into the included sac for easy transport.

So far I’m really enjoying my ultra-light parka, and will definitely be keeping my eye on the sales of the other ULD products in the coming months. I have yet to test this jacket in the harsh Canada winter, but based on performance so far it’ll definitely see some use.

The UNIQLO Ultra Light Down Seamless Parka is on sale for ten bucks off through Wednesday 11/7.