Editor’s Note: I personally don’t have any experience with this brand, or, ordering via Ali Express. But our contributor Zach really wanted to give this a shot. As always, Caveat Emptor. Your experience may vary when it comes to ordering items like this direct from overseas. Returns could be close to impossible, if not just that.

For the past two weeks, I’ve been hard at work testing out the Corgeut-brand dive watch to see if it’s as good as its specs sounded. I first found this watch while browsing AliExpress.com, and a quick google search revealed it was well known on some of the watch forums. For the price, if it actually is as good as the pictures look, it’s the deal of the year. I’ll tell you in advance that I’ve purchased this watch with money I earned, and have no affiliation with the company, so any pros and cons are entirely my unbiased opinion.

Before I get into this review, I’m going to state the obvious. This is an homage of the Tudor Black Bay. Every aspect of the watch aside from the movement and the branding is clearly inspired by the Black Bay. This is either okay, or very much not, depending on your taste, but this particular watch is clearly and openly branded as a Corgeut, so I don’t see it as any different than any of the countless Rolex Submariner homages from brands like Invicta.

The cheapest place to order the Corgeut is directly from AliExpress. After I ordered mine, I learned that you could purchase one off of Amazon, though they’re about 40 dollars more than from AliExpress. If you’re not sure about putting your credit card information in on a Chinese site, you can pay with PayPal (that’s what I did). So far, I’ve seen just about every one of the standard color schemes. I chose the blue bezel with the gold markers and a steel bracelet, but there was also the traditional maroon bezel, a black bezel, and even the bronze cased tropical dial version, and the PVD coated black option were present. With the steel bracelet, my total came to 130 dollars plus the extra 10 I paid for tracked DHL shipping. My transaction processed overnight, and the watch was sitting on my front porch about 6 days later. It arrived in a well-padded cardboard box. Inside this box, the watch was nestled in a small Styrofoam coffin, wrapped in bubble wrap. There’s no gift box, but the watch was certainly well protected from damage. I was impressed, to say the least. I’ve had my share of Chinese watches, and this is nothing like I’ve experienced. The machining is accurate, the colors are great, and the dial looks extremely well done. Unlike most Chinese mechanicals, this watch uses a Japanese Miyota 8215 movement, which makes it more durable and accurate than the cheap Chinese movement. It doesn’t hack or hand-wind like some of the more expensive movements out there, but it does keep reasonably accurate time. The bezel is a little loud when turning, but is crisp in its motion. Unusually, it uses 90 clicks to make a full rotation, rather than the 60 or 120 every other watch I’ve ever handled uses. One thing that deserves special mention here is the bracelet. For not that much more than the leather strap, you’re getting a machined steel bracelet with solid end-links and a machined clasp. That’s absolutely insane. While I will say that the machining quality isn’t quite as good as the watch, it’s easily just as good as the bracelet on my far more expensive Marathon dive watch, and the Corgeut has the better clasp. Another plus of the bracelet is that it uses screws instead of pins to assemble the bracelet, so you can size it yourself at home with the screwdriver from an eyeglasses repair kit. The watch wears well. Being mechanical, it weighs more than a comparable quartz watch, but it’s by no means a boat anchor. At 41mm wide with 22mm lugs for straps, it’s a modest and practically sized watch that will accept straps from almost any maker. The size and colors make it suitable for wear with a suit, or casual on leather or even on a NATO strap if you see yourself preparing for some rough work. At 13mm thick, it fits under shirt cuffs well enough. So, the type on the face of the watch says this watch is 200 meters, or 660 feet. For this price, I thought that would be too good to be true, so I took it to a jeweler to have it pressure tested. I was right, and can now say for certain that the watch is waterproof to 100 meters. Am I disappointed? A little bit, to be sure, but a 100m watch with a screw down crown is more than adequate for my needs, and I’ve showered and swam several times while wearing it with no trouble. The second durability question is the crystal material. The seller specifies sapphire, but I wasn’t so sure. In a bit of unofficial testing, I took a hard fall the other morning and the watch contacted the pavement in a rubbing motion. The raised lume pip on the bezel was slightly damaged, but the crystal isn’t. This leads me to think that it really is sapphire, as my Wenger dive watch with a mineral crystal was damaged in a similar accident about three years ago. 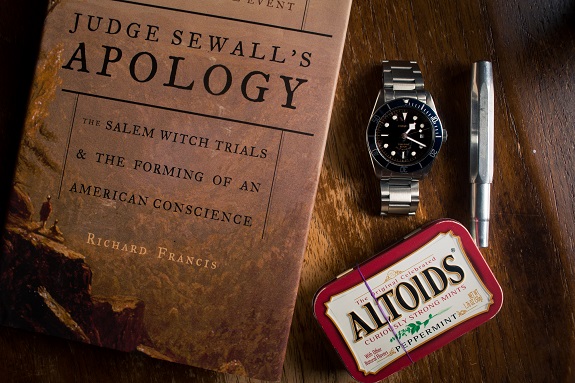 As a watch, accuracy is important. I’m not going to blow smoke up your you-know-what by claiming this is going to replace your gps watch or mechanical chronometer, because it won’t. Over the course of a week, mine averaged 15 seconds fast per day. That’s not shockingly good, but unless you’re the navigator on a World War 2 era bomber, it’s probably satisfactory for your purposes. There is a detail I will mention: The Miyota 8215 has a “stutter” you should be aware of. Unlike the smooth buttery sweep of most Swiss movements, the Miyota sweeps at a slower rate, so the second hand appears a little more jittery. According to a jeweler I spoke with, this is normal, and does not affect the accuracy of the watch.

I’ve had so much positive to say about the watch, now it’s time for me to talk about what I don’t like: 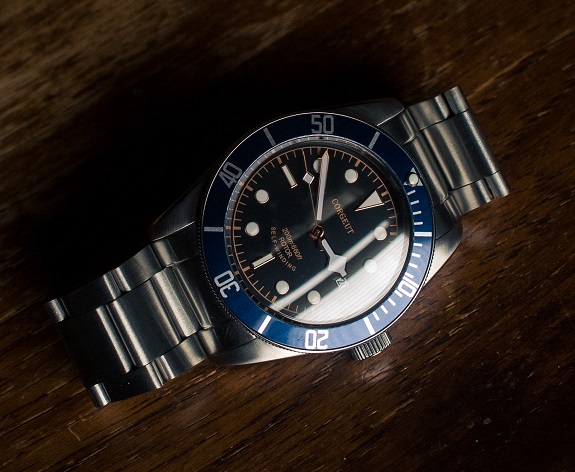 Overall, I’m really impressed by this watch. If it was 200 or 250 bucks, I’d say it was an okay deal. For 130, you really can’t beat it. It’s even cheaper than the Orient Mako and Seiko SKX007, and I think it looks better. If you don’t mind that it looks like a Tudor, or that it’s produced in a factory in China, it’s a damn-fine watch for the money.

About the Author: Zach S. is an expedition and product/lifestyle photographer from Maryland’s Eastern Shore, and a graduate of The United States Military Academy Preparatory School. When he’s not doing photography, he’s writing and working towards his goal of becoming a Marine Aviator. Click here for Zach’s 5 Favorites.