Surprise. It’s underway. Allen Edmonds has quietly launched one of their biggest sales of the year one day early. Both first quality, and second quality shoes are seeing some of the best discounts AE offers. But since it doesn’t officially start until tomorrow, you’ll have to hunt and peck a bit to find the deals. Or, you can scroll through our picks below for what we consider to be the best of the best, taken from both the regular first quality line, and the factory 2nds options. Got a tip on something we missed? Send those suggestions into joe@dappered.com. One of the biggest discounts of the sale in terms of first quality shoes. The times? They have a changed. And now full price Allen Edmonds are going for more than four hundred dollars. So to get a first quality pair for under two-fifty is quite good. They are plain, but they’re not boring. Great shape to them, and the slightly wider laces make them super easy to dress down if you so choose. Absolutely suit worthy too. What some would call a quarter brogue. Still an oxford though, so plenty dressed up for any serious events like job interviews. Lots of colors to pick from. Plenty of sizes. First quality. Remember, they’re still sticking to the new, more expensive, $25 restocking fee on factory 2nds shoes. And if you’re new to the game, these are shoes that aren’t quite perfect. A nick here, a scratch there, a wrinkle in the leather, but overall the shoe is structurally sound. Why so high on this list, when at post time you can still get the Brooks Brothers version for $50 less? Two reasons: 1. That Brooks Brothers sale ends today, so, more than a few are gonna miss out. 2. They have more colors and size options over at Allen Edmonds. A dark brown or walnut pair of McAllister Wingtips is something to behold. And Brooks Brothers only has burgundy and black. Classic. Conservative. Won’t scare the senior partners in your firm (if you work in a firm). Look up the word “shoe” in the dictionary and you might see a picture of these things… if it happens to be a dictionary that includes those little illustrations every once in a while. In case you don’t want to play the 2nds game. First quality, no restocking fee for returns, and one of the more popular new-ish designs that AE has come out with in recent years. Love that medallion at the toe. Full review can be found here. Dropped down in these rankings due to only walnut being available for these two 2nds options. Some sizes are available in other colors, but, the vast majority of us are gonna be stuck looking at walnut if we’re interested. Not that most don’t love walnut. Most do. UPDATE: Big thanks to Mark G. for pointing out that if they don’t have your color & size on the main Allen Edmonds site, head on over to shoebank.com and check out what they have there. There’s allegedly more sizes/colors over on that site, although you’ll have to pick up the phone to make your order. Not for everyone, but goodness they’re something else. Shown above is the dark chili shade. Also available in walnut or black. Just wish they’d make them in their true, dark brown. Full review of these things can be found right here. One of the better boots out there, and under $300 is a more than fair price. Chromexcel leather, a toe that’s not overly bulky, and a subtle studded dainite sole comes standard. Full review here. I lucked out with my pair. The blemish that apparently made mine factory 2nds was so small that I barely noticed it when I pulled them out of the box. And after a bit of wear and tear? I don’t notice it at all. You might not be so lucky. That’s the game though with factory 2nds. Still might be worth the risk if you love chelseas. They’re incredible boots. And at full price, first quality Liverpools run almost half a grand. Here’s why these are so far down this list. Even though they’re brand new designs that some (but not all) will drool over, playing the factory 2nds game with wholecuts is a big risk. Why? Because all of that uninterrupted leather is really gonna draw the eye to whatever the flaw is that sent them to the 2nds pile. And you just don’t know the severity of the defect until they show up. If it’s too noticeable for your tastes? It’s a steep $25 to send em’ back. Yep, a casual belt. And a not so cheap one at that, even with the discount. But it is made in the USA, and the layering of canvas and leather looks pretty darn good. Something you’ll probably use a ton in the warmer months to come. 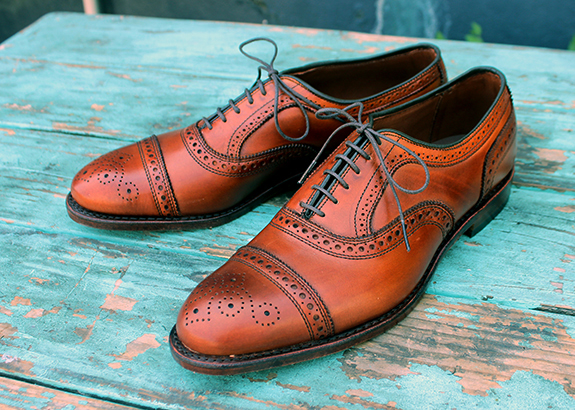 If you’re in the market for Strands, I’d suggest you hit up the Brooks Brothers wardrobe event before it expires at the end of today. Now that said, it looks like sizes and widths are starting to get a bit scarce over at Brooks Brothers. And they don’t have all of AE’s shades of leather to pick from. Also, some rumors are flying about that those Strands at Brooks Brothers aren’t made by AE anymore. (Yet they’re made in the USA?) Yet some say they’re the tail end of the AE and Brooks Brothers collaboration. I’m more than confused. Both are factory 2nds, and both are from the upper echelon “Independence” line. Even better leathers. Two tone outsole. Even more attention to detail than their main line. BUT… that doesn’t mean someone doesn’t screw up during the manufacturing process, and thus, we still get 2nds quality every so often with the Independence line. Thus, the big discount. Still a $25 restocking fee if they don’t workout though. There’s just one review, and it’s a one-star review, but the person in question seems to have gotten a mislabeled pair of shoes in terms of the width. So yeah, take that review with a grain of salt. Not much of a discount here. And boot season is just about up for most of us. Therefor, these Daltons fall pretty far down this list. I’m gonna guess that if you’ve got $700 to spend on one pair of shoes, you’re probably not waiting around for a sale. But hey, who doesn’t like to save some cash? See the full review here, when we gave them away as part of a previous reader appreciation week.