First, hate to be nit-picky (because really, who cares) but while Banana Republic calls this an oxford, it’s not a true oxford. Thanks to its open lacing, it’s a derby or a blucher. And second, it actually seems to work better as a blucher, being that it’s one hell of a smart casual shoe that can be worn with chinos, cords, or jeans, and clocks in just over two bills with the frequent 40% off codes that BR runs.

Now, it was just half off during the most recent friends and family sale, but it might be a bit till it drops under $200 again. That said, a made in Spain, Goodyear welted shoe, with a great toe shape and decent quality leather is tough to find with free shipping and returns (*cough* MEERMIN *cough*). And these do all that. One small quibble, and I might be mis-remembering, but I feel like the leather on these Brogues is a bit stiffer than the leather that was on the loafers that debuted a few months back. Perhaps it’s just the multiple layers, being that they are wingtips, or how they were shaped over the last. But it doesn’t feel quite as flexible as the loafer leather. Again, I could be off here, but it might take a little break-in time for some. So be prepared to wear socks that aren’t paper thin for the first few spins. Other than that, it’s right on par with the construction and quality of those loafers that blazed the BR Goodyear Welt trail. Good, uniform and even stitching, an eye catching color, and the overall shape is sleek without being spear like. Stumpy old-man wingers these ain’t. They’re a half-wing, aerodynamic alternative to the Florsheim Kenmoor, which frankly, can be a bit battleship-like on the foot. (Meanwhile, is the Kenmoor the old Veblen? What the heck happened to the Veblen? And why do I remember the names of defunct shoe models, but for the life of me can’t remember how to do long division?) Sizing feels maybe a touch long, so, try em’ on on a carpeted surface before you commit. And once you commit, might want to scrape up those soles before you set out on any surfaces that are slick. Because they’re smooth as all get out, out of the box.

Also available in a pebbled black color. Same sole though, which is a toasted light oak. So, not gonna be appropriate for dressier looks with that black leather, but they do have a nice, purposeful contrast to them in that black colorway. The cognac option shown in this post is a smooth leather, and one almost wishes they woulda pebbled this stuff too. 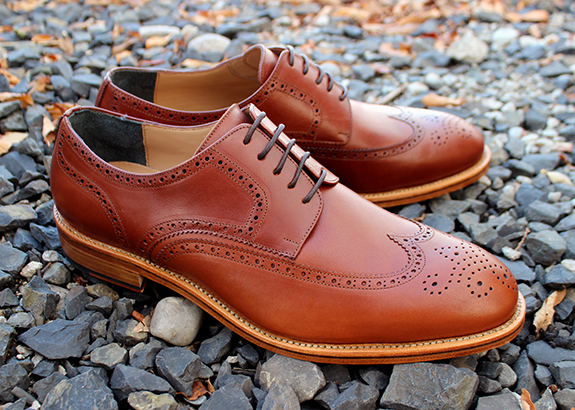 $350 seems steep since that’s what many full price Allen Edmonds go for, but Banana Republic hasn’t been excluding these things from codes and promos. That means they’ll go for the low $200s, or less, if you stack the rare half-off code with the extra 10% off cardmember BRCARD promo. Do that, and they’ll end up at… $157.50. And they’re a steal at that price, if you can make it happen.