Over $75, but with codes and sales they’ll surely drop under. Could be another made in Portugal winner from H&M? First there was these. And then there was these. And now… these boots? Thinking they’d look pretty good with pale grey or even white chinos at present, and down the road would do extremely well with dark wash jeans. *NOTE: This is the anniversary sale pricing. If you’re a Nordstrom cardmember, you get access to those prices now. For the rest of us, we have to wait until this Friday (7/22). These pants would be the stretch version (2% spandex) of the extremely popular, khaki-diaper-butt eliminating, Bonobos washed chinos. Lots of good colors to pick from, and since it’s Nordstrom, they ship and return for free. 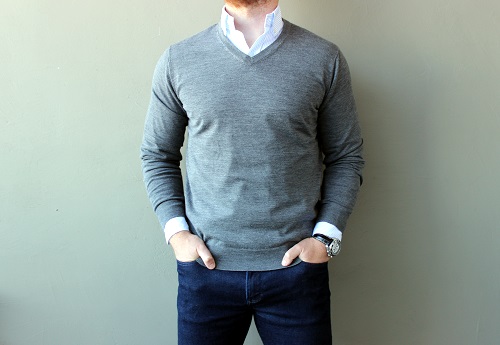 Nope. Not sweater season. But these things still deserve to be mentioned. Not a chunky sweater in the least. Downright thin. But not see through, and super strong. And that makes for a perfect layering piece (since it won’t overwhelm a shirt or be super thick and mushy under a blazer). Shown above is a size medium on 5’10” / 185. Easily one of the best things UNIQLO makes. On sale often. Tons of colors to pick from. A mean looking, affordable sport watch with a dash of color. 100 m water resistance. Nato strap. Black ion plated like brass case and rings. Really liking the true-blue dial as well. Ships free since it’s over $25 and sold via Target. Was seemingly out of stock for a while there? But they’re back, and they’ve even added that perfect light shade of grey. Piping along the collar, sleeves, and chest welt pocket. Kinda like an Original Penguin Earl polo, but with BR’s incredible luxe touch cotton, and less risk of shrinkage in the wash. Often if not always up for codes and promos, so, sit tight for one of those. Above average hold yet not drifting into concrete/crunchy territory. Super matte finish. Lightly scented with a fresh but still masculine scent. Smells good enough that when someone tells you that “you smell nice” (has happened to me, thank you very much) you’ll get to tell them thank you, and that you don’t wear cologne. This style of sunglasses, with the metal frames + larger/plastic ear pieces… they’re hugely versatile. Dressy enough for a suit, but also right at home with more casual stuff. And the grey on black scheme here is perfect. Polarized. Ships and returns free through Nordstrom, which is key, since sunglasses can be real tough to order over the web since you’re not trying them on first.

If you haven’t seen it yet, see it. Full disclosure: It leans heavily, in tone, to the #feelthebern crowd. But even if you don’t subscribe to those political sensibilities, it is a fantastic portrayal of what you can get when you question the narrative of those shouting the loudest, who are also the types who haven’t spent an ounce of time or energy being self-critical. If it’s too good to be true, well, you know the rest. There is balance in the universe. When someone or something is belching an extreme, with little evidence of a solid foundation to back up the whirlwind, then rest assured that the foundation is just that. Wind. (And a sidenote: Kudos to Brad Pitt and his performance in this flick. You actually forget, for once, that he’s Brad Pitt.) Kudos to those who picked up a pair on sale during Amazon’s Prime day. Nice, fitted style without the elastic, diaper-like waist band. Inner mesh liner. Retro piping. Sure, Canvas by Lands’ end stuff might be “excluded from all promotional discounts”… but it was just a matter of time before it went on sale. Code or no code. Which, again, makes their “Circle” membership thing just flat out strange. Mid-gauge knit, a slim fit, and big bold stripes. Perfect with summer weight chinos for a cool, early morning during a weekend getaway. (photo credit)