About the Author: Zach S. is an expedition and product/lifestyle photographer from Maryland’s Eastern Shore, and a graduate of The United States Military Academy Preparatory School. When he’s not doing photography, he’s writing and working towards his goal of becoming a Marine Aviator.

Even if you never plan on sitting in a cockpit or circumnavigating the globe, you can still appreciate the value and aesthetics of a pilot’s watch, as they give off an air of technicality and bold style that (to me) places them above the common “desk-divers” the rest of your office wears.

Those are the basic, classic features of a pilot’s watch, but some specialty models can also feature:

So you’ve got options in terms of what the watch can do. You also have options in terms of price. You can pay as little as sixty dollars, and upwards of thousands upon thousands. Below are five of the most popular and best bang for the buck pilot watches you can get, in increasing price points. The Seiko 5 powered SNK805 is a complete classic. At just 37mm in diameter, it’s not really a true pilot’s watch, yet it meets most of the other criteria. And for the price you really can’t beat it. It features a dial modeled on the classic B-UHR style watches used by the Luftwaffe navigators in the Second World War. Impressive at this price point, the SNK805 features a reliable Japanese automatic movement, so there’s no need to ever change a battery. It also features both the day and the date, which is a very practical thing to have, and the watch allows you to use a quick-set feature so you don’t have to spin the crown a million times to set the date or day. It also has an exhibition caseback. If you’ve never owned a mechanical or automatic watch, this is a great watch to get your feet wet! Larger than the Seiko at 42mm in diameter, the Orient Flight is a sexy, modern interpretation of the classic pilot’s watch. Available in multiple dial colors, including the cobalt blue shown above. Like the Seiko, this watch features an automatic, in-house movement, and the amazing legibility of the classic B-UHR layout, which prioritizes minutes over hours. The extra cash over the Seiko nets you a larger size, greater legibility, and higher water resistance for increased durability. There are a few 3rd party sellers on Amazon selling earlier models of this watch at a discounted price. The latest and greatest model (which is really no different than the earlier ones) runs $206.50 – $217 direct through Orient. *But to get this price, you need to use the ever present 30% off codes. DAPPERED30 should work, but don’t feel obligated if you find something better out there. 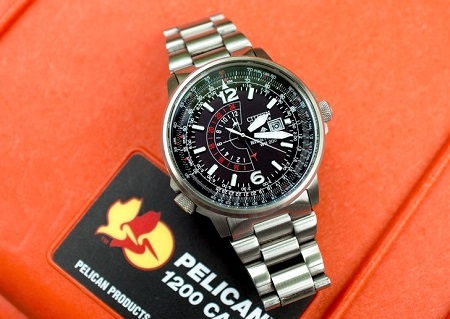 I’ve owned a Citizen Nighthawk for about four years now, and I firmly believe that it’s one of the best values in watches available. For about $300 you not only get the classic pilot watch styling, but you also get the added values of a GMT hand (so you can tell the time across separate time zones), and an E6B circular slide rule. Though confusing at first, the slide rule will enable you to quickly do multiplication and division, as well as convert metric to imperial and numerous other calculations. I use it to calculate tips at restaurants. The Citizen features their very popular, very accurate, solar powered quartz Eco-Drive movement. As it was clearly aimed at globe trotters, the watch has a jump-hour function, so that you can skip by hours to the next timezone without having to worry about messing up the minute hand or the date. Lastly, and very impressively, the Nighthawk features one of, if not the best bracelet I’ve seen on a watch for under $500. It has solid end-links, and a very secure precision machined clasp with a diver’s safety on it. The first of the two Swiss-movement watches on this list, the Hamilton Khaki Pilot represents a major jump in watch quality. As you can see, the Hamilton shares all the features we’ve come to recognize in a good pilot’s watch. Clear markers, large sword hands, and a visually distinct 12 marker are all present. A unique feature of the Hamilton is the way the hands are illuminated, so that the glowing portion of each hand will only touch it’s corresponding hour/minute index. The watch features a very functional 200 meter water resistance rating, as well as a large 46mm diameter, which alludes to the pilot watches of old, which would get as large as 55mm. The Khaki Aviation Pilot is a handsome, reliable watch. (photo via hamiltonwatch.com) Though it is the most expensive, the heritage and quality of the Sinn 556A, to me, makes this one of the best values in the aviation watch world. Of all the brands on this list, Sinn is unique in that the company began by exclusively manufacturing airplane cockpit clocks and pilot’s mechanical chronographs. It was also a Sinn automatic chronograph that helped prove automatic (not just mechanical) watches would retain their functionality in space. The entry-level watch in the Sinn lineup, the 556A nonetheless has an impressive set of specifications. Water resistance is 200 meters. The sapphire crystal proves much more resistant to scratches than cheaper mineral crystals. Inside the watch sits an ETA-2824 Top Grade movement, which can be viewed through the sapphire case-back. My favorite thing about the Sinn however, is the face. The face of the 556A is made to match the appearance of Sinn’s cockpit clocks, which are used in fighters and other airplanes around the world. It features the same distinct Arabic font, as well as the matte face and sharp, luminous hands, and I think it’s the most legible on this list. Though a pricey purchase, dollar for dollar Sinn watches have just as much history and quality as the pricier options from Breitling and Omega, and will outlast you and your children.

Note: It’s always smart to do your homework on just who you’re buying from. If it’s not an authorized retailer for that certain brand, you might not get the factory warranty (or, any warranty). You can save money buy buying from someone else (say, Amazon or Jomashop), but know that there might be a catch in terms of service if something goes sideways.