Steal the Style is an all too infrequent series on finding affordable alternatives to the styles seen on the big or small screen. If you’ve seen a movie or a TV show that you think is ripe for a Steal the Style attempt, send those suggestions in here.

Editor’s Note: More than a few of us have been looking forward to this movie for a while. And while all Bond movies are pure fantastical fiction, the four Daniel Craig movies have felt at least a little more realistic than the camp-filled goof fests that the Bond franchise had devolved to prior. More on the movie itself at the end of the post. Meanwhile, here’s a selection of affordable alternatives to some of what Bond wears in SPECTRE. Just keep in mind that even though Criag’s Bond is grittier & more realistic, even the styling utilizes some movie tricks. Meaning: It ain’t gonna look as good in real life. And sometimes? You just have to wear comfortable shoes. 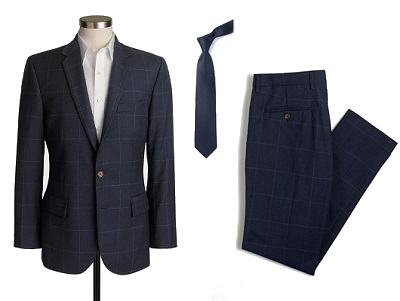 Not a lot of contrast here, as Bond opts for a navy suit with a very subtle windowpane, as well as what appears to be an almost matching blue necktie. The J. Crew Factory option is flannel, so perfect for the oncoming cooler weather, but maybe not so perfect for running through the streets of Mexico City. Tie is via TheTieBar.

on a Black & Grey Nato Strap The real deal is gonna run you $7500. And while the Seiko 007 isn’t quite as refined as Omega’s Seamaster (the Seiko would be tough to wear with a suit) it’s close enough. Even the model number on the Seiko is on point for the theme. You’ll need a spring bar tool to swap out the strap, but once you get that grey and black NATO on there, you get the look for sure. No “Alarm” on this one. The man has quite the outerwear collection in this movie. While speeding up the Thames with Tanner, Bond is in a basic navy single-breasted topcoat, navy scarf, and black leather gloves. Basic for sure, but it shows that mixing black and navy can work and work really well. Made in the UK Cashmere & Merino Scarf from Charles Tyrwhitt. Sheepskin gloves via Sierra Trading Post. This is when Q gives him the watch. A pretty basic look, but instead of a super pale-blue, desaturated shirt, there’s a richer blue dress shirt paired with the striped suit and basic navy tie. (More of a point collar to the shirt as well, instead of the usual semi-spread that most of us wear.) BrooksCool fabric breathes well, and resists creasing. The full-canvas is a nice bonus, especially at the sale price. Interesting choice for a funeral. Looks like the real deal are Tom Ford again, with a thicker frame than you’d expect for Bond, and a shape that’s starting to drift towards cat-eye territory. No key-hole in the pair used in the movie, but the Warby Parker Neville is awfully close. Plus you can try them on at home for free. You also get free shipping & returns, plus polarized lenses at the $95 price point. It’s an Officer’s coat. And you might be able to find one at your local Army/Navy surplus for cheap. So, start there. Otherwise, you’re looking for what’s basically a Peacoat but with an extended, knee-length (if not shin length) tail. Not mid thigh like J. Crew’s Dock Peacoat. Longer. 007’s coat appears to be a solid, dark navy, and the Suitsupply (pricey) option has a subtle glen plaid pattern to it. Meanwhile, the Made in the USA Schott would be perfect… if it wasn’t single breasted. Tough to find an exact match. Turtlenecks are making a serious run this year, and Bond seems to favor them as well in the movie. Not a cable knit like 007’s, but close enough with the ribbed knit. Also appears to be not too bulky for being lambswool, which is right on with the apparent weight of the actual sweater used in the movie. Sizing is unisex, so make sure you look at their detailed size chart for measurements. About as close as you’re gonna get. The quilting pattern isn’t quite the same (this one is a diamond pattern, as opposed to the horizontal quilting 007 has going on) but for $149, it’s an awfully close match. Even has the ribbing to the lambswool portions. Ships and returns free via Nordstrom. Want something cheaper? Lands’ End has a similar style, but uses fleece for the arms and back instead. Should drop to $70 – $80 with codes. The side flaps on true mountaineering glasses are meant to shield the wearer’s peripheral vision from the blinding glare snow can create. But if you walk around with a pair of those things on, you’ll look like you’re headed to a steam-punk convention. Opt instead for the Ray-Bans that have a matte, rubber frame, mirrored lenses, and a true aviator shape. Plenty of sun protection & style while still giving off a bit of a technical look. Review here. Because nothing says Morocco… like a suede jacket? Bond’s jacket is much lighter in shade, but still. 007 opts for a suede jacket as they sweat it out in Tangier. ‘kay. *You’ll need the code VETS to get the 50% off, $299 price. There’s also a cheaper option via ASOS, but sizes are scattered there. He also wears a Johnny Collar polo (read: no buttons) during that span as well, and Target has their version on clearance. Between the wider peak lapels and the red boutineer (see the top of the post), 007 has a lot of clavicle adornment going on. Frankly, it looks pretty dandy-ish. Most of us would probably favor something a little sleeker? So… skipping the peaks in favor of a shawl collar here, which can look more streamlined on most torsos (not that there’s a darn thing wrong with classic peak lapels). The Suitsupply jacket is an Italian cotton/linen blend, so there’s gonna be some texture. If you want a smoother wool, J. Crew sells a Ludlow fit Shawl Collar dinner jacket… for $525. Ouch. Bond’s suit is a more saturated, almost rust or olive shade, and almost certainly linen… but it’s November. Not a lot of summer suiting options are available. The all-cotton Fairfax from Bonobos is on sale for $225 (*NOTE: You’ll need the 25% off $175+ code HEADSTART), and only half lined. So it has that going for it. If you’re a fan of the J. Crew Crosby cut, you can get one of those for a steal right now, with the jacket & pants costing just $124.99 w/ the code GETSHOPPING. But the Crosby is final sale, and the photos don’t seem to be consistent in terms of projecting what the “sun drenched sand” shade looks like. Bond once again stays pretty tonal, and favors a brown knit tie to go with his khaki/brown desert suit. They appear to be a Clubmaster style (almost certainly much more expensive) but the wire bridge and rimless bottom to each lens are pretty standard, classic clubmaster details.

About the movie: Plenty will love it. It’ll make a ton of money. But for those who loved Casino Royale, this feels like an even further step away from that tone. There’s just too much stuff and stunts, and not enough of a solid, believable (y’know, for a Bond flick) story. It felt like a casserole of focus-group suggested Vine clips. Never got bored. Not for a second. But it felt shallow. Even for a Bond movie. And that’s a bummer, especially since almost all signs point to this being Craig’s last turn as 007.