Like most men and women in their thirties, many of my weekends involve weddings. Some are for my closest friends. Others are for work friends who I like but probably won’t see in five years other than via Facebook post. Right now, I’m at about twelve weddings in the last fifteen months. Closer to twenty for the last two-and-a-half years. Between gifts, hotels, and travel, it’s expensive to be friends with people who get married and/or have kids. But I get it, weddings and children are a big deal. And they should expect and receive gifts from their friends.

But what about moving? Let’s say I’m on the verge of making a cross country move. Is that an occasion for me to say to my friends and colleagues, “this is a big deal, come celebrate with me (and by the way, bring a gift, especially if there’s literally no way you’ll be making the trip to where I’ll be and I totally gave you an awesome wedding gift)!”?

Or is this just way out of bounds for social norms?

Look at you, referencing my old stand-by, SATC! Love it.

Those who follow a standard trajectory of getting married and producing children benefit from the long-held traditions of gift-giving during these life changes. Traditions which came about because when people married many eons ago, they typically moved straight from Mom and Dad’s house to their new marital home, and thus, they needed stuff. Linens, dishes, toothbrush holders. Many people who now marry at a later age are bonafide adults who’ve already established a home with furnishings…and yet the tradition persists. 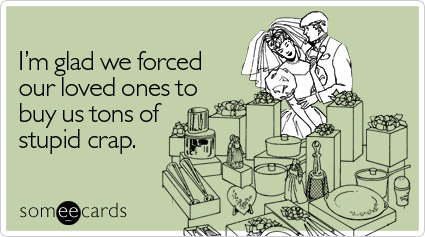 So the reality of being in your 20s and 30s is that you’ll attend a lot of weddings, bachelor/bachelorette parties, bridal showers, baby showers, baptisms, and so on. You’ll attend them for good friends, old friends, work friends, and friends you’ll never see again. You’ll end up spending an enormous amount of money on these events, even though, for most people, the tradition is pretty outdated.

I would love to tell you, yes, you have faithfully supported countless friends as they’ve married and multiplied, go ahead and send out invites for a moving party and include where you’re registered so that people bring a gift celebrating you the way you’ve celebrated them. But…I don’t think people will react favorably. They’ll likely think you’re nuts. Or inappropriate. Or super weird. People are accustomed to giving the person who just said “I do” a set of matching non-stick pans. They’re used to giving the lady with the swollen feet a diaper pail. But the single dude who is moving? It’s going to raise eyebrows.

Brandon, this is not Nam. This is tradition. There are rules.

So, no, I don’t think you can make moving cross country (or town) an occasion for giving gifts like those you would receive for a wedding. Is that fair? Absolutely not. Never fear, though, I think this is a good wake-up call for those of us here on Dappered, myself included. Fellas, next time you know that a single friend has an important life event, consider celebrating it the way he or she has celebrated you. Instead of bringing a $10 bottle of wine to their housewarming, how about a generous gift card to Crate and Barrel or Macy’s or Target? This is a good opportunity to be mindful that there are many instances that deserve gifting for those whose lives don’t adhere to the traditions of marriage and procreation. Cheers.