BRGOOD45 = 45% off at BananaRepublic.com (exclusions apply)

Yep. Those damn pesky exclusions. It’s the usual, lengthy list too. No blazers. No suit jackets. No “BR Picks”, which is the arbitrary label Banana Republic puts on stuff they don’t want to be up for codes quite yet. So there’s lots to dodge with this one. But 45% off is about as high as Banana Republic goes (aside from those once in a blue moon 50% off F&F sales).

And there’s a lot to look at right now.

Especially if you’re sitting on some returns from the holidays, need a bit of a wardrobe boost now that winter is in full friggin’ cojones crackin’ swing. Code expires today though (1/13), so, if you’re gonna get on it, get on it while the gettin’ on can still be gotten. Banana Republic doesn’t often drift into the realm of bad-assery, but this jacket has elements of said realm. A new arrival. 74% cotton / 26% linen and, if you believe the item’s title, it must be waxed or coated in some sort of weather resistant substance. Nice gunmetal hardware too. Has a McQueen-esque vibe to it. BR’s bags can sometimes be suspect in terms of quality, but saw this one in store and it was actually pretty nice. $300 nice? Nope. $93 nice? Yep. Surprisingly roomy too. Leather trim and a mainly poly w/ some wool mixed in fabric exterior. Already on sale. Their flagship chinos, now at 45% off. They used to exclude these things from promos and codes pretty regularly, so it’s nice to see them under forty bucks. Standard colors available, and remember, BR has that branding patch above the right butt cheek. Plenty don’t care that it’s there. Some do. No issue either way. BR’s casual button downs seem to be made just a little bit better than the competition (think UNIQLO, Gap, etc…). The soft-wash fabric isn’t a thin poplin but isn’t a squishy oxford cloth either. Somewhere in between. Nice bengal stripe to this one. Hugely versatile and very layerable. Made in their slimmer than their slim-fit “tailored-slim” cut (that’d be a mouthful). Want gingham instead of stripes? Okay. Ordered it for an in person. Hasn’t showed up yet. This one looks like its tail might be shorter compared to their trenches from the past? Liking the looks of that felt under-collar. Very nice price with the 45% off code. And an option for those who feel that a traditional trench might just look a little too Inspector Gadget. Navy, single breasted, zip out liner… simple. The only review online so-far just crushes this thing (one star!) because it has a lighter-blue stripe detail under the collar. It’s… it’s just a design detail. I mean, c’mon. Fair enough to not like it, but cripes. Relax. Depends on where you prefer wearing leather. (For those of you that said “the bedroom”… WELL then.) The quilted leather palmed version seems to have a slimmer wool lining than the leather topped gloves. Has a bit of a shearling thing going on there. 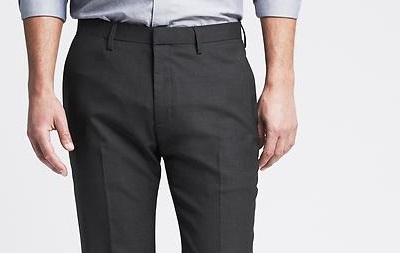 All wool. Extremely well reviewed. Word is they’re not quite as slim cut as the “tailored slim” shirts are? Dang. Grey suede, and a monk strap. Wear em’ with jeans now, and with off white chinos & a lightweight blazer once the warm weather rolls around. Also available in “wheat” suede as well as black suede. From their upgraded quality “Heritage” line. Sometimes heritage stuff doesn’t get included in codes. Glad to see that it is here. Moleskin is a terrific fabric. Feels like a sueded cotton. Kinda like velvet, only matte with less depth/fuzziness to the nap. Might be a great coat for those parts of the world that don’t get quite so bitter cold during the winter? Don’t let the expectations get out of control here. BR’s shoes, especially their leather (not suede) offerings… can sometimes miss. And this shoe missed in the lighter tan. Perhaps the burgundy will look better up against jeans, or lighter grey trousers? Bit of a clearance going on with these two, so sizes are scattered depending on what colors you want. The two v-necks BR hangs their hats on. The Extra Fine Merino is terrific stuff. Strong, lightweight, and easy to layer. Their silk/cotton/cashsmere sweaters are loved by some, but avoided by others. The fabric is super smooth, but some think it retains heat a little too well (hasn’t been my experience, but, some feel that way). The V on the silk/cotton/cashmere sweaters DOES dip noticeably lower than the extra fine merino. So, know that. Both could fit a little trimmer through the middle, yet aren’t enormously boxy or anything. Certainly more of a summer looking shoe, but that slightly elongated vamp and tapered toe really gives these a more modern shape. Something to keep an eye on. Also available in a darker grey.

They’re a “BR Pick”. Which means the code won’t work on them. These things hardly ever go on sale/go up for codes. And they’re spectacular. $118 spectacular? Boy. That’s just a lot of money period.