Christian Davis is a 24-year-old Los Angeles based writer who up until now has focused mainly on writing about video games. He recently began wanting to dress better, and he’ll be cataloging his process for us here on Dappered.  He might be new, but he’s learning quick.

The only time I ever thought I would ever have to break in some sort of clothing was maybe a new pair of leather boots. Jeans though? Never even crossed my mind. For years (a solid 23 of them) I always got mass produced manufactured jeans and was completely content with that. Jeans were that all American, rugged sign of a man and you shouldn’t spend more than $40 on a pair. For me, the durability of those $30 – $40 jeans just wasn’t very long. Leg openings would start to get torn and fray, color would fade rather quickly if not instantly, and my preferred store of choice was JC Penney.

That was years ago, and honestly, I haven’t owned a pair of blue jeans in several years. So when I decided to jump back into the denim world, I was pretty surprised by how much it had changed.

Once I started reading up on all the new high-quality denim, it sounded like everything was raw selvedge Japanese denim with contrast stitching that’s been infused with virgin hair and washed in the deepest crevice of the ocean. All these attributes make them sound way cooler than three pairs of Arizona jeans for $50 from JC Penney. Now, I was down to buy those jeans if I needed to. But in my naivety, I assumed these fancy selvedge jeans would be around $60. Seemed like a bit of a stretch to me (oh was I in for a surprise), but I figured, “How often do I get to wear something with virgin hair in it?! Let’s go and check out these jeans and cop me a pair!”

I couldn’t fathom the price of wearing a car payment on my legs knowing that I’d inevitably spill barbecue sauce on them. I didn’t’ buy any of the first round of selvedge I looked at, and I ended up giving up for another several months. But I had been bitten by the high-end denim bug, so I set out to try and figure out why these things cost so much.

What I Learned. Selvedge & Raw

The term “selvedge” (or is it selvage?) was omnipresent during my research. I didn’t know what the hell it meant, but I figured it contributed to the price since I’ve never seen that terminology on any of the basic jeans I’ve owned before. The term is pretty simple and refers to the edges of the pant. If you have a pair of selvedge jeans that just means that there’s a clean finish, which stops the edges of the pants from unraveling. With a selvedge construction the pants will essentially last longer, and to many, they have a much better aesthetic (see below). Everything I read also seemed to suggest that owning a nice pair of high-end denim isn’t just the same as owning another garment. Wearing them is an experience which transforms the pair of pants and how they look on you over several months or years. This seemed to be where the term “raw” came in. I hadn’t heard of that before either. I assumed it meant it wasn’t “processed” in some way but I was guessing and using context clues generally associated with food and not jeans. Turns out, I was kind of right….kind of.

Raw denim means that the jeans haven’t been washed after the’ve been dyed during the production; this is also known as “dry” denim. With the raw denim step, this allows for the jean customization which comes into play through “natural distress,” aka wearing them.

The customization is where the jeans gain their own personality and denim heads will be able to tell how you treat your jeans through their distress.  There are various patterns that come through your jeans that are caused by different daily functions:

With a combination of wearing these jeans to no end (every day isn’t uncommon) and no washing, the jeans will form the aforementioned patterns and will be YOUR jeans (see examples over here). No set of jeans will get the same patterns or fade at the same location. For example, if a guy does a lot of lifting in his jeans and bends his knees quite often, he’ll accumulate combs quicker and they’ll probably be more prevalent. They become, in a way, a reflection of you. Some denim experts can even see a story in someone’s raw jeans (what pockets they put stuff in, how often they’re worn, etc…). It’s fascinating.

What I ended up with.

The prices still seemed awfully high. Too high. But then I came across a small brand called Red Cotton Denim.

I found out about Red Cotton Denim by reading Broke and Bespoke’s blog (who was featured in my 10 Menswear Tumblrs to follow post) and it was just what I was looking for. Shop owner Camillo Love makes all the jeans by himself, by hand, and can only make about three to four pairs a day, and learned a lot of this on his own.

That’s a story I can get behind. And at a hundred dollars, it was doable.

I purchased a pair of 12 oz American and they arrived within a couple of days. The price of these jeans from Red Cotton Denim were $100 at the time but have gone up in price since (they’re now $125 on sale). Even though these were a third of the price of some other jeans I had looked at, $100 was still a stack a cash for one pair of jeans in my book. Upon opening the package, three senses were pleased: sight, scent, and touch. 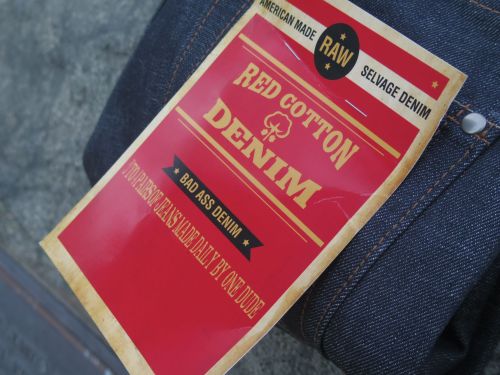 A fresh pair of jeans smells and feels different than the store bought ones. It feels…rustic and genuine and you’re incredibly happy to wear something of this stature. They really do take some time to break in, but once they start to give to your movements, they start to take on a second skin-feel. A second, armored skin.

Currently, I’ve had the jeans for roughly three months without a wash yet and wearing them on basically a daily basis is something new. I don’t even do that with shoes, but with the jeans, I know I’ve got this goal. I’ve already got some of the combs behind my knees and I’m curious to see what the fade will look like over time. Thanks to this process, it definitely makes getting dressed each day a lot easier, that’s for sure. Half my outfit is already picked for me! Nothing wrong with that.

I only own this one pair, so I wouldn’t consider myself a deni-head by any means, but I think I’m grasping why high-end denim is so sought after right now. I also get why people who dive into this admittedly expensive world cherish their jeans so much. And it’s not just because of the price they paid.

Editor’s Note: Many thanks to Christian for the in-depth look of his first high-end denim purchase. That said, many of us (my hand is raised) might still not quite “get” the allure of raw, selvedge denim. So which side of the fence are you on? Leave it all in the comments section below.