Heads up fellas: there are two WATCH recommendations this week. I’m not apologizing. I had to include both. I had a bit of a theme going on and then POW! – life, or in this case, death happened. I will fight you if you have an issue with this.* Also, it looks a little different this week because we have an original in-house recipe for you guys.

WATCH: I Am Easy To Find – The Movie.

I was lucky to experience this movie at a screening that included the director Mike Mills, The National, and the actress Alicia Vikander. Not gonna lie. I was deeply affected by this movie. I remain surprised at the hold it has had on me since seeing it. Mills collaborated with The National, using their music as an inspiration and soundtrack. The film moves along without dialogue, the story being propelled by sub-titles. It is filmed in black and white and I was intrigued with the art-house vibe Mills employs here. Vikander is simply stunning. I hope you can see this on the biggest screen possible. 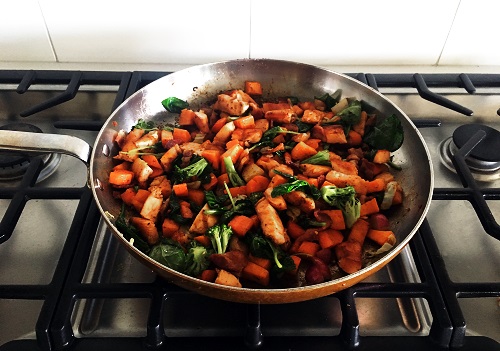 Bacon Salmon/Chicken Power Bowl. Some of my favorite dishes come together by happenstance. Mostly this involves digging through the fridge to see what I have to choose from. My point being that you don’t need to have a recipe to make something tasty. A few skill sets and a good pantry are your friends. Joe sent me this photo last week and described what he did and I was instantly jealous. Also, hungry AF. Joe made his with salmon because that’s what he had but he’s also used chicken and likes it even better. I love this kind of meal. I enjoy the prep, sipping on something while I’m cooking, and enjoying the results. Check it out here.

LISTEN: I Am Easy To Find – The Album.

That screening I mentioned above was not the only experience of that special evening. There was a Q&A after the screening featuring Bryce and Matt of The National along with Mike Mills and Alicia Vikander hosted by Carrie Brownstein. And then The National took the stage to perform the album. There was something unique and intense about hearing an album for the first time in this manner. Director Mike Mills produced this album in tandem to making his movie based on the band’s music. This new album features female vocalists, something the band has not employed before. This brings a rich new element to the already emotional nature of their music. And perhaps because of my experience, I recommend listening to I Am Easy To Find in its entirely on first listen.

Hi. My name is Tim and I was a Doris Day fan. Not even embarrassed abut this. The woman was marvelously gifted. She was a terrific actress and singer. And she spent much of her life championing the protection of animals. I sat down and re-watched this film the night she passed. It happens to be one of the best films of the past 70 years. It’s a Hitchcock classic. If you haven’t seen it, it offers a great example of 1950’s Americana even as it is set in Marrekesh and London. And yes, there are a couple wince-worthy moments, now common with movies from this era. But, it is totally worth it.

It’s not something that happens on a certain date. It’s not something I can force. It just happens. And I’m always so happy when it does. It happened last week. We had temperatures in the upper 80’s, the yard had become green and shady and I was ready. I have officially entered iced-tea season. I switched to cold brew tea bags years ago from the jug-in-the-sun version I had been brewing since…well the point is that I continue to look for ways to freshen the routine. This orange ice-tea recipe is simple. As much as I appreciate the recipe itself, I’m a fan of the template it suggests for adaptations. There are so many possibilities for different versions of this.